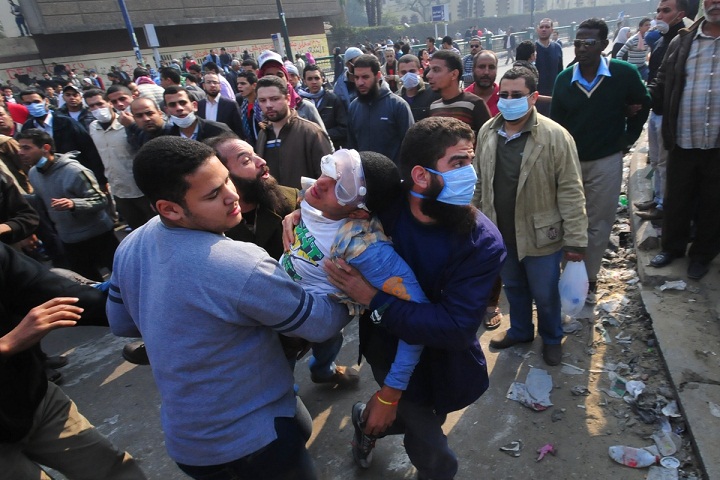 The proposed protest bill, awaiting the president’s ratification to pass, is more dangerous than the currently announced state of emergency, 17 non-governmental organisations said on Wednesday.

In a joint statement, the organisations said that the draft Protest Law blends all that is emergent and exceptional into a normal law. They added that the draft law aims to normalise the state of emergency and turn it into a permanent state.

The draft Protest Law was approved by the cabinet and referred to interim President Adly Mansour for ratification on 10 October, meanwhile stirring wide criticism from domestic as well as international human rights organisations and political movements.

The signatory organisations said they regretted the approval of the draft Protest Law by Prime Minister Hazem El-Beblawi alongside the majority of his cabinet, reminding the approving ministers that if Egyptians had been unable to exercise their right to peaceful protest, those ministers would not have taken up posts. They also applauded the few ministers who voiced their rejection of the draft law and called on interim President Adly Mansour not to ratify it.

“Instead of busying itself with preparing new oppressive laws, the interim government should have worked on reforming security apparatuses and amending the police law to make it comply with international standards,” the statement read. It added that the proposed law would instigate further political, economic and social crises.

The signatory organisations stated that the continuous protests in Egypt are reflective of political, economic and social issues and therefore warrant political, social and economic solutions rather than security ones.

“A law drafted to organise peaceful protest should put into perspective the practices of security forces in Egypt,” the statement read. “Such practices are capable of turning the best protest law in the world into a fertile field of violations and crimes.”

The organisations said that most protests which took place in Egypt since 2011 witnessed “lethal use of force” by security forces. They gave the examples of: the attack on predominantly Coptic protesters outside the Maspero building in October 2011, the Mohamed Mahmoud Street clashes in November 2011, the Cabinet Clashes in December 2011, the Presidential Palace clashes in December 2012, the forcible dispersal of the Rabaa Al-Adaweya and Al-Nahda sit-ins in August 2013 and the 6 October clashes earlier this month. The organisations said that such incidents left behind almost 3,000 citizens killed without serious investigations or judicial convictions in most cases.

The organisations pointed out that the current draft law resuscitated the draft Protest Law proposed by the Muslim Brotherhood when former President Mohamed Morsi was in power. It added that the current draft, submitted by the Ministry of Justice, proved to be even more oppressive than the previous one, as it didn’t stop at oppressively limiting the right to protest, but went as far as limiting the right to assemble, strike, sit-in or organise marches.

“The law imposes comprehensive restrictions on Egyptians’ freedom to express all forms of peaceful assembly,” the statement read.

The signatory organisations criticised the “strict restrictions” the draft law placed over organisers of assemblies or protests, especially when weighed against the “lax restrictions” against the security forces’ use of excessive force.

“If some participants in a protest or assembly commit a crime, it still doesn’t justify dispersing the named event, using lethal force or collectively punishing the majority of other participants,” the statement read.

The organisations also criticised what they described as “coining a new definition to legitimate self defence”.

Article 13 of the draft law gives security forces the right to use force, as well as water cannons, teargas and batons, if they are in a position of “legitimate self-defence”, or to defend “financial interests”.

The organisations condemned what they described as “harsh fines” and punishment for those who break the protest law. The punishment can reach up to five years in prison and/or an EGP 100,000 fine.

Signatory organisations included; the Egyptian Initiative for Personal Rights (EIPR), the Association for Freedom of Thought and Expression (AFTE), the Arab Network for Human Rights Information (ANHRI), the Egyptian Centre for Economic and Social Rights (ECESR) and the Hisham Mubarak Law Centre (HMLC).

The National Defence Council said on Sunday that the cabinet will receive suggestions regarding the draft Protest Law for a week of “societal dialogue” and that the law would be issued after reviewing these suggestions.

Amnesty International criticised the bill in a statement released on Saturday, warning that it would “pave the way for further bloodshed”.