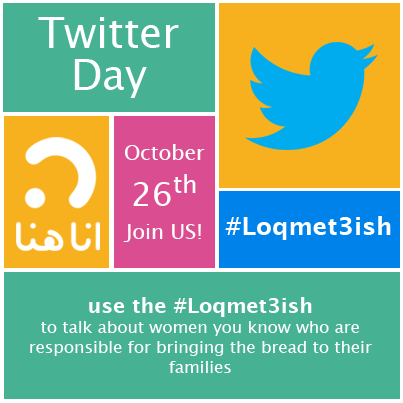 On Saturday 26 October it is hoped that thousands around the world will pick up their phone, tablet or computer and log on to Twitter to support Women Bread Winners in the Middle East and North Africa region.

Gender equality is a global issue, but according to the Gender Gap Index 2012 the Middle East and North Africa region has fallen behind the rest of the world for closing that gap. According to the Ana Hunna or ‘I am here’ campaign, women are the main breadwinners in 33% of Egyptian households.

In the 2012 report Egypt ranked 126 out of 135 countries included in the index rankings.

Esraa Saleh, a member of the Ana Hunna campaign, believes the Twitter day will be a useful tool in raising the campaign’s profile. She said that the aim of the day “is to speak about women households,” which those involved in the campaign call ‘Women Bread Winners’. Saleh continued to explain “those women are totally ignored by society, despite the fact that they make a great contribution to the economy. They are fighting to earn their living, not only for themselves but for their families as well.”

Saturday’s Twitter day will have two roles to play in the Ana Hunna campaign according to Saleh, firstly “to highlight [Women Bread Winners’] efforts… and also to discuss with others what the possible solutions are to provide them with better opportunities.”

The Ana Hunna campaign literature explains the issues women who want to enter the labour market face in Egypt, despite the increase in enrollment and achievements in education for women. One issue is rooted in the stigma that “a woman’s place is seen to be at home, men are considered the main breadwinners.” The campaign highlights that women “lack access to work-related training and childcare facilities.” It adds, “Sexual harassment is a major obstacle to moving freely in the public sphere.” Therefore the campaign aims to change these perceptions and highlight the positive role women can have in the economy through challenging the “social norms”.

With over 500 million users, Twitter is one of the best ways to reach out to the world and people are able to track specific topics through the use of hash tags. On Saturday the Ana Hunna campaign will be using ‘#Loqmet3ish’, which literally translates to ‘piece of bread’ but is also a common term used to identify the poorer segment of society that will work for comparatively low wages, a piece of bread, in order to provide for themselves and their families.

Ana Hunna began as a media campaign, said Saleh. The campaign has nine short films that look at the challenges facing women in employment and looking at female role models from different backgrounds that fought for their rights and succeeded. Saleh says the campaign is now growing: “currently we are transforming Ana Hunna to be an initiative.” Through working with its partners the campaign hopes to “provide effective activities for our target groups so that they are able to have a real and wide contribution in the Egyptian economy through their work and social participation,” said Saleh.