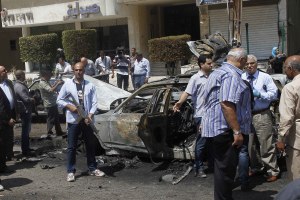 The jihadist group Ansar Beit Al-Maqdis (Supporter of Jerusalem) revealed on Saturday the identity of the suicide bomber whom it claimed had carried out the attempt on the life of Minister of Interior Mohamed Ibrahim, alongside an alleged footage of the explosion.

In a video statement released on YouTube, Ansar Beit Al-Maqdis claimed that the attempt was carried out by a former military Major called Waleed Badr who graduated from the Military Academy in 1991.

The jihadist group stated Badr worked at the administrative affairs force until “Allah guided him to the path of reason after he saw the army for what it really is.” Ansar Beit Al-Maqdis accused Military Intelligence of breaking into Badr’s house, which led him to stop going to work. He was fired from the armed forces after being promoted to Major.

The armed forces’ spokesman Colonel Ahmed Ali’s office confirmed that Badr was fired from the armed forces in 2005 for “frequent absence and for exhibiting signs of belonging to extremist religious activities.” Concerned security apparatuses were notified with the reasons for firing him, according to the spokesman’s office. His relation to the armed forces was severed since he was fired.

According to Ansar Beit Al-Maqdis, Badr migrated to Afghanistan where he “practiced jihad” after being fired, later moving to Iraq to carry out further such insurgent activities. Ansar Beit Al-Maqdis also said Badr was arrested in Iran and imprisoned for nearly a year. After his release, Badr returned to Egypt then took off to Syria to join in the jihad against the Baathi regime. Back in Egypt again, he allegedly fulfilled his “long time wish of carrying out a martyr operation.”

“He was chosen to carry out the vengeance battle for Egypt’s Muslims against … the Minister of Interior Mohamed Ibrahim,” according to Ansar Beit Al-Maqdis’ video statement.

The video message involved a man dressed in military uniform that Ansar Beit Al-Maqdis identified as Badr. The man said that Egypt’s police apparatus and armed forces are a “sect which must be fought and stopped from attacking Muslims.” He also accused military leaders of “fighting religion”.

The message went on to show masked men trained to shoot and attack; Ansar Beit Al-Maqdis described the scene as the group’s trainings. It also showed a video of what was described as a perimeter swap conducted around Ibrahim’s house to choose the “suitable spot for the explosion”, followed by a video of a car explosion captioned as the attempt on the minister’s life.

Ministry of Interior spokesman Hany Abdel Lattif said security apparatuses are looking into the video released by Ansar Beit Al-Maqdis. He added that they are soon to release information on those behind the assassination attempt.

The second field army forces and police forces arrested on Saturday four personnel described as armed militias in North Sinai, reported state-run news agency MENA. They were reportedly arrested while in possession of two laptops where the video of the attempt on Ibrahim’s life was stored alongside other videos of operations targeting security elements. They were also reportedly in possession of birdshot weapons and ammunition, three surveillance cameras and communication devices.

The attempt left Ibrahim  unhurt but injuries were sustained by the minister’s guard and civilians nearby, while the blast tore off the facade of an apartment building’s first four floors.