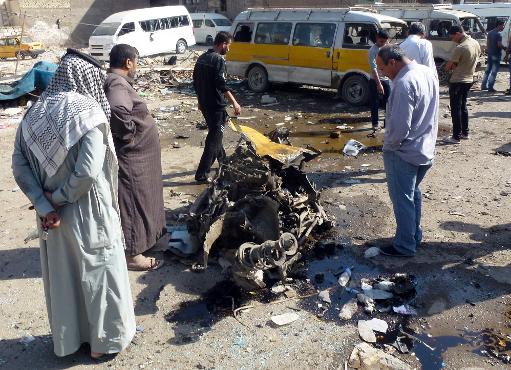 At least five other people were killed in other attacks, the latest in a wave of bloodshed that has pushed the October death toll from violence across Iraq past 630.

The Baghdad blasts, which hit eight different areas in and around the Iraqi capital, also wounded more than 90 people, the security and medical officials said.

One of the worst-hit neighbourhoods was Shaab in north Baghdad, where two car bombs exploded in a commercial area, killing five people and wounding at least 17.

Sunni militants often carry out attacks against members of Iraq’s Shi’a majority, whom they consider apostates.

Iraq has since last month restricted many Baghdad residents to using their cars only every other day, but the measure has failed to prevent dozens of vehicle bombs exploding in the capital.

In the northern city of Mosul, a car bomb attack targeting soldiers waiting outside a bank to collect their wages killed at least 12 people on Sunday, military and medical officials said.

Civilians were believed to be among those killed in the attack, which occurred in the east of the city, also leaving around 20 people wounded.

The attacks came after a car bomb exploded near an army checkpoint in Mosul, killing a woman and wounding eight people.

And gunmen shot dead two Shi’a civilians in the Muqdadiyah area, northeast of the city of Baquba.

Violence in Iraq has reached a level not seen since 2008, when the country was just emerging from a brutal sectarian conflict.

The surge in bloodshed this year, which has included sectarian attacks, has raised fears Iraq may relapse into the intense Sunni-Shi’a conflict that peaked in 2006-2007 and killed tens of thousands.

Analysts say the situation has been aggravated by the Shi’a-led government’s failure to address grievances of the Sunni Arab minority, which complains of political exclusion and abuses by security forces.

The level of violence spiked after security forces stormed a Sunni protest camp in northern Iraq in April, sparking clashes in which dozens died.

The authorities have made some concessions aimed at placating the protesters and Sunnis in general, such as freeing prisoners and raising the salaries of Sunni anti-Al-Qaeda fighters, but the underlying issues remain unaddressed.

More than 630 people have now been killed so far this month, and more than 5,300 since the beginning of the year, according to AFP figures based on security and medical sources.

A study released this month by academics based in the United States, Canada and Iraq said nearly half a million people have died from war-related causes in Iraq since the US-led invasion of 2003.

In addition to major security problems, the Iraqi government has failed to provide adequate basic services such as electricity and clean water, and corruption is widespread.

Political squabbling has paralysed the government, while parliament has passed almost no major legislation in years.