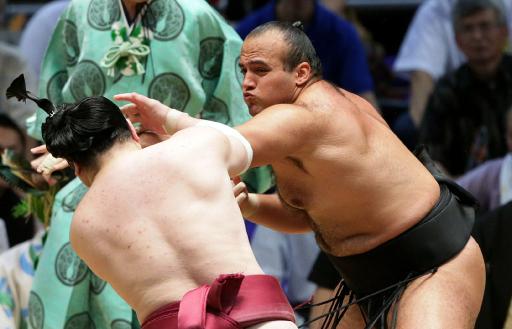 AFP — The first professional sumo wrestler from Africa or the Arab world continued his meteoric rise with his promotion Monday to the sport’s elite division.

This is made up of 42 wrestlers including two grand champions (yokozuna), both of whom are Mongolians.

“I am not so happy, as I feel tense,” he told a news conference.

“I still have a lot of work to do because wrestlers are strong at the makuuchi level,” said the 189 centimetre (6 feet 2 inches) Muslim, who weighs in at 146 kilograms (322 pounds).

“I will work hard to establish my style of sumo, better sumo. I need to gain more power, too.”

But the young wrestler also struck a confident tone, saying: “I don’t care who my opponents may be, as Osunaarashi I will be all right against anyone.”

The Egyptian made his debut in March last year and lost no more than two bouts in each of the following eight tournaments, which have seven matches in the lowest division.

He reached the second division of 28 wrestlers in May and went 10-5 in each of the two 15-match tournaments at that level.

That result came even as he fasted during the first tournament in July. Devout Muslims are forbidden from eating or drinking during daylight in the holy month of Ramadan.

Osunaarashi begins in the makuuchi division in the second to last of the 21 ranks.

He has taken just 10 tournaments since his debut to join the top flight, the second fastest ascent after Japanese wrestler Jokoryu made the grade last year following just nine tournaments.

Thirty-nine foreign-born wrestlers have reached the top division but Osunaarashi was the quickest to do so.