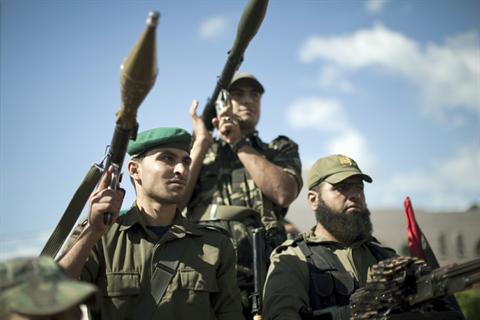 “Ten Hamas operatives were detained overnight across the West Bank,” an army spokeswoman told AFP, without giving any further details or reasons for the arrests.

Hamas has ruled the Gaza Strip since it took over the territory in 2007, but many of its members remain in the West Bank, which is home to the Palestinian Authority, dominated by president Mahmud Abbas’s Fatah party.

Palestinian security officials told AFP that Israel had on Sunday night arrested 15 Hamas members in the northern West Bank cities of Tulkarem and Nablus, and the southern city of Hebron.

The officials said two of those arrested in Hebron were Palestinian MPs who had been detained several times before, but the army spokeswoman could not confirm this.

The remainder were mostly students, the Palestinian officials said.

Hamas condemned the arrests, saying they were a joint Israeli-US-Palestinian plot aimed at forcing through any agreement reached in ongoing Middle East peace talks, which the movement opposes.

“The arrest campaign waged by the (Israeli) occupation aimed to… impose upon our (Palestinian) people the results of the unpalatable and dangerous negotiations,” Hamas spokesman Fawzi Barhum said in a statement.

“It comes as part of American-Israeli collusion with the Palestinian Authority” to make Fatah stronger than its rival Hamas, Fawzi added.

Hamas opposes Israeli-Palestinian peace talks, which were launched in Washington at the end of July, arguing that president Abbas’s government does not have the authority to negotiate on the part of the Palestinian people.

The US and Europe have backed the West Bank-based PA under Abbas, boycotting Hamas since it won Palestinian general elections in 2006.