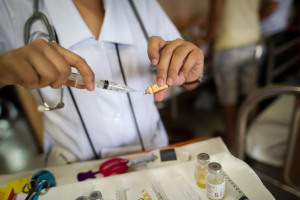 The Ministries of Health and Finance announced Tuesday the finalisation of a new law to improve the income for medicine-related professions who work in governmental positions, according to an official statement issued by the ministry of finance.

The law’s implementation will cost the government EGP 6bn annually, to be deducted from the public treasury.

The finance ministry statement added that the new law aims to increase incomes for employees as well as improve the medical services offered to the public.

Minister of Finance Ahmed Galal said the new law project is being coordinated with the Ministry of Health as well as the medicine-related syndicates.

Members of the Egyptian Medical Syndicate (EMS), however, have expressed their dissatisfaction with the new law. EMS member Ahmed Hussein said that the announcements for the new law are still vague.

“The problem with ministerial announcements is that they lack the legality which makes them an abiding law, so one can’t really guarantee if this new project is a go or not,” Hussein said.

He added that the syndicate has submitted a proposal for doctors’ income which was approved by the Ministry of Finance and that the ministry should clarify the differences between the syndicate’s proposal and the announced law.

“The fixed salary was supposed to be EGP 1,800 while the remaining was meant to be cadre incentive,” Hussein said adding that a 7% annual increase was to be added to cope with the changes of inflation.

On the official website for the EMS, the syndicate’s secretary general, Gamal Abd El-Salam, stated that an agreement was reached on 27 June between the Ministry of Finance, the Shura Council, along with the Ministry of Health and the EMS, on the law’s broad outlines.

“We are hearing the total gross salary will be around EGP 1,800 only,” Hussein said. “Nothing is confirmed.”

Hussein also mentioned that aside from the financial changes, there have been several administrative changes regarding the hiring and transferring processes.

“These changes are vital and yet they remain unknown,” he said.”They must be disclosed to the public.”

The new law, which will be applied starting January 2014, is said to improve the income of 463,000 employees in the medical sector, among whom will be doctors of various specialisations, pharmacists, physiotherapists, physicists, chemists, veterinarians and nurses.

The incentive law will result in a 420% to 600% increase on the employee’s original salary, with 75% of this increase in the form of a special incentive and benefit, while the other 25% will depend on the evaluation of the job performance.

The official statement added that 75% of the total new benefits will be provided to medical professions employees next January, while the remaining 25% will be given starting July 2015.

The interim government has been criticised by economic analysts for its announcement of a number of costly populist projects, which would weigh heavily on the budget.

Earlier this month, the Ministry of Finance announced the increase of the tax limit for personal tax exemption from EGP 4,000 to EGP 7,000 annually, bringing the total number of public sector families who will benefit from this decision to 6.2 million, state-run news agency MENA reported on Tuesday.

The government also issued a decision to exempt public school students from paying tuition fees this year. The Minister of Education said earlier in September that this decision would cost the government EGP 700m.