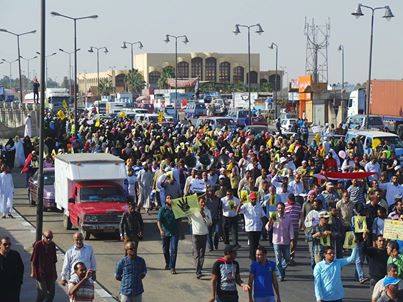 45 supporters of ousted president Mohamed Morsi were arrested in Alexandria amid clashes between their march and residents of Sidi Beshr district on Friday, state-owned Al-Ahram reported.

The arrested were allegedly in possession of birdshot and publications inciting against the army and police, according to Al-Ahram.

Clashes started on Friday afternoon when Sidi Beshr district residents attacked a pro-Morsi march in the area, in response to the march’s blockage of Corniche Road and their chants against army and police, with rocks being thrown.

Security forces dispersed the clashes using only teargas, according to state-owned Al-Ahram.

In Cairo, a pro-Morsi march on the Nasr City street of Mostafa Al-Nahas witnessed a brawl between street residents and marchers, similarly in response to the march’s blockage of the street and their chants against the army and police.

The Nasr City march was heading to Rabaa Al-Adaweya square, which is completely surrounded and blocked by army forces.

Suez witnessed a pro-Morsi march, where numbers were lesser than previous ones.

The march diverted its route from Al-Geish main street in Suez to Nile street in Al-Arbai’en square in order to avoid potential clashes with army and police forces in Al-Esa’af square.

Friday’s marches come as a part of “Trial of Popular Will” protests called on by the National Coalition to Support Legitimacy in a Thursday statement.

The protests, according to the coalition, will continue until Monday, the date set for Morsi’ strial.  14 other Muslim Brotherhood members will also be tried on the same day for their role in the Presidential Palace clashes in December 2012.