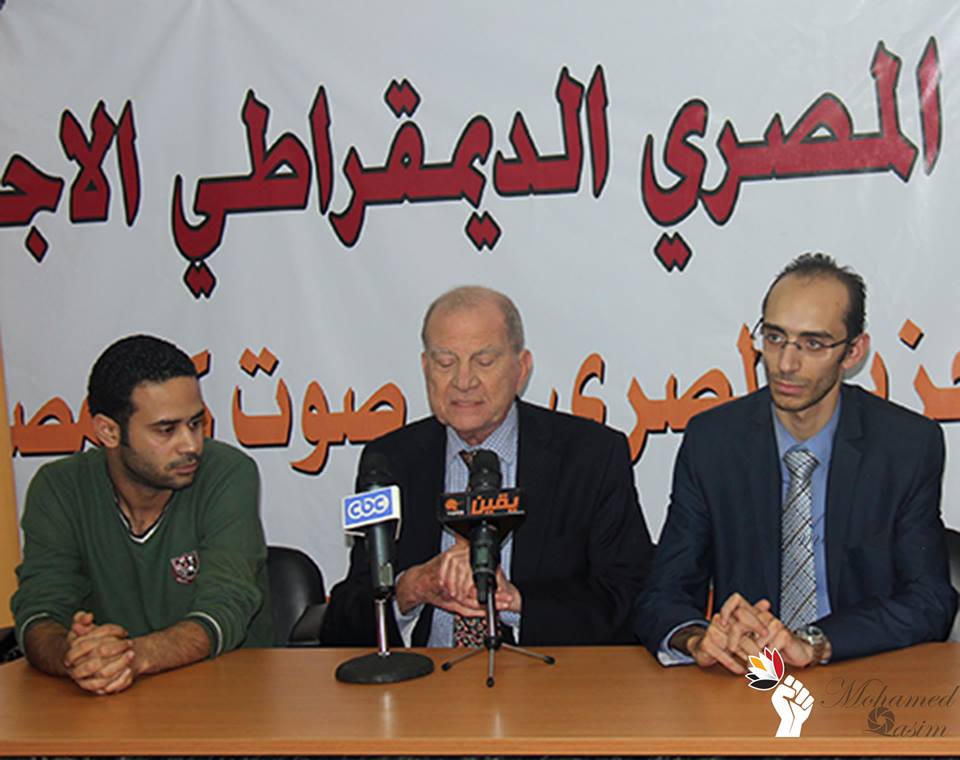 The Tamarod (Rebellion) campaign and the Egyptian Social Democratic Party (ESDP) announced on Thursday that they will form an electoral alliance.

During a press conference at ESDP headquarters, party chairman Mohamed Aboulghar said the alliance forms part of a broader alliance that will be comprised of “all patriotic political powers.”

Aboulghar added that “the civil political powers will not repeat the mistakes of the previous parliamentary elections, and will engage in discussions to form a real, civil and democratic alliance.”

The ESDP chairman added, in the presence of Tamarod’s leading figure Mahmoud Badr, that there is an agreement with Tamarod to join forces in order to “block the forces of darkness from entering the parliament,” in reference to the Muslim Brotherhood.

Tamarod founding member Mohamed Abdel Aziz said in the press conference that the campaign would carry out meetings with political powers to agree on the procedures to form the intended broad civil alliance.

Tamarod also announced on Monday the arranged coordination between the campaign and Al-Tayar Al-Sha’abi, according to the group’s spokesman, Hassan Shahin.

On that occasion, Shahin announced that the campaign will soon meet with ESDP leaders for the same reason. Meanwhile, ESDP figures Mohamed Arafat and Basem Kamel refused to confirm the occurrence of the meeting until it happened.

Shahin had also announced on 27 October that talks between Tamarod and the National Salvation Front (NSF) were being held regarding upcoming parliamentary elections.

Meanwhile, the ESDP announced on 13 October that a “joint committee” was formed to set up a merger with Al-Dostour Party, while on 1 October, the Free Egyptians Party announced a merger with the Democratic Front Party.

The ongoing mergers and alliances within Egypt’s political scene, with Tamarod as a common factor, could fulfill Shahin’s goal “to form the broadest nation-wide alliance that includes revolutionary factions under the umbrella of Tamarod.”