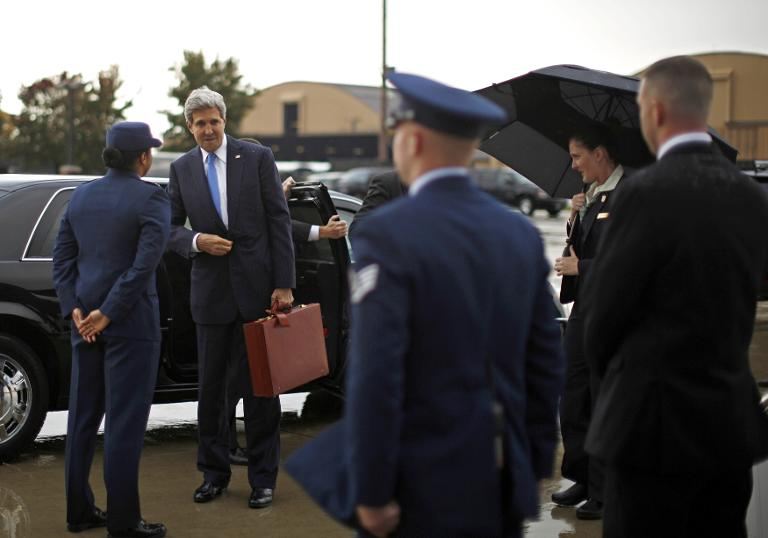 John Kerry arrived in Egypt on Sunday at the start of a tour that will take him around the Middle East, North Africa and Europe. This will be his first visit to Egypt since Mohamed Morsi was toppled as president.

Official spokesman for the Ministry of Foreign Affairs Badr Abdelatty confirmed to Daily News Egypt that the US Secretary of State would visit Egypt despite no announcement being made by the US State Department. The visit is expected to last only a few hours as Kerry is due to arrive in Riyadh later on Sunday.

Kerry arrived the day before the high profile trial of former President Mohamed Morsi. The US has consistently condemned all political detentions and called for due process in all judicial proceedings.  Egypt’s foreign ministry insisted on Saturday that Morsi is being tried for “criminal charges rather than political ones” and that he would receive a fair trial.

The US Secretary of State’s visit comes at a time when tensions are running high between the US and Egypt following the former’s decision to “recalibrate” its aid package to the latter in October. This included delaying the delivery of military equipment such as F-16 fighter jets and Apache helicopters. The spokeswoman said the delivery of such equipment would be delayed pending, “credible progress toward an inclusive, democratically elected civilian government through free and fair elections.” Around $260m of cash was also suspended.

Assistance that “directly benefits” the Egyptian people and the building of economic institutions will not be halted, said the state department spokeswoman.

The ministry criticised the decision almost immediately, saying that it raised questions about the US’ readiness to “provide Egypt’s security programmes with strategic and stable support.”

A week after the US announced the halt in aid, Fahmy said that relations between Egypt and the US were going through a “delicate” phase. Both countries have since expressed their desire to maintain good relations and “work together”. Fahmy has also said that the decision will not have an impact on developments in Egypt as the interim government plans to stick to the roadmap laid out by the armed forces on the occasion of Morsi’s ouster, a roadmap that the US has expressed its support for.

Kerry is the highest ranking US official to visit Egypt since Morsi was toppled and the interim government assumed power. US Deputy Secretary of State William Burns travelled to Cairo and held intensive meetings with political stakeholders in August along with EU Special Representative for the Southern Mediterranean Region and foreign ministers of the United Arab Emirates and Qatar in an attempt to facilitate a dialogue between the opposing political factions. US Senators John McCain and Lindsey Graham and representatives of the US Congress Michelle Bachmann, Steve King and Louie Gohmert visited and expressed their support for Egypt’s military against “the terrorist known as the Muslim Brotherhood.”

Kerry is expected to travel to Riyadh, Warsaw, Jerusalem, Bethlehem, Amman, Abu Dhabi, Algiers and Rabat from 3 November to 12 November, according to State Department Spokeswoman Jen Psaki. In a press briefing on Friday Psaki told reporters that the “path forward in Egypt” is one of the topics to be discussed during Kerry’s tour.