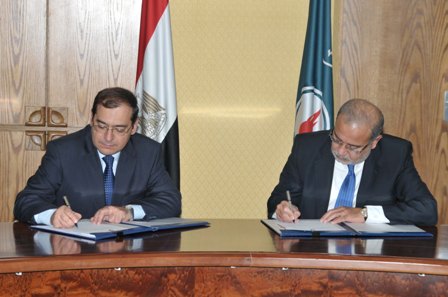 Minister of Petroleum Sherif Ismail on Thursday signed nine agreements in the natural gas and oil exploration field with $470m in investments, according to a statement from the ministry.

The nine agreements, which are the first to be signed since 2010, authorise exploration for petroleum products in Sinai, the Gulf of Suez and the Western and Nubian deserts. They were signed with Shell, BICO, Greystone, Petzed and the Egyptian General Petroleum Corporation (EGPC).

The agreements also include a $50m contract to drill 15 wells.

Ismail stated that these agreements are the largest in quantity ever made, and along with the previous the 21 agreements the ministry had previously approved represent “a positive message and a sign of trust that Egypt is still attracting petroleum investments.”

“There is a growing interest by international companies to work in Egypt because of its economic feasibility and petroleum prospects,” Ismail added.

Ismail added that these 21 other agreements are expected to boost investments in the field of research and exploration in order to boost production and reserves of oil and natural gas.

The minister had in October denied rumours that international oil companies would halt their production in Egypt as a result of the government’s delay in repaying its dues. Rather, he confirmed those companies’ commitment to their plans of exploring and developing the discovered fields, with the government having set aside $8bn in the current investment budget for the 2013/204 fiscal year to assist in such activities.

Despite the slide in the investment rate, about 24.1% of total investments in the country were directed toward the oil and gas sector in the fiscal year 2012/2013, according to a report from Ministry of Planning in October.

Research conducted by marketing communications consultancy Orient Planet said that potential upheavals to the international oil supply chain would significantly impact the global economy and oil security. These movements, however, would not be enough to displace the Middle East as a global leader in oil in particular and energy in general, the consultancy said.