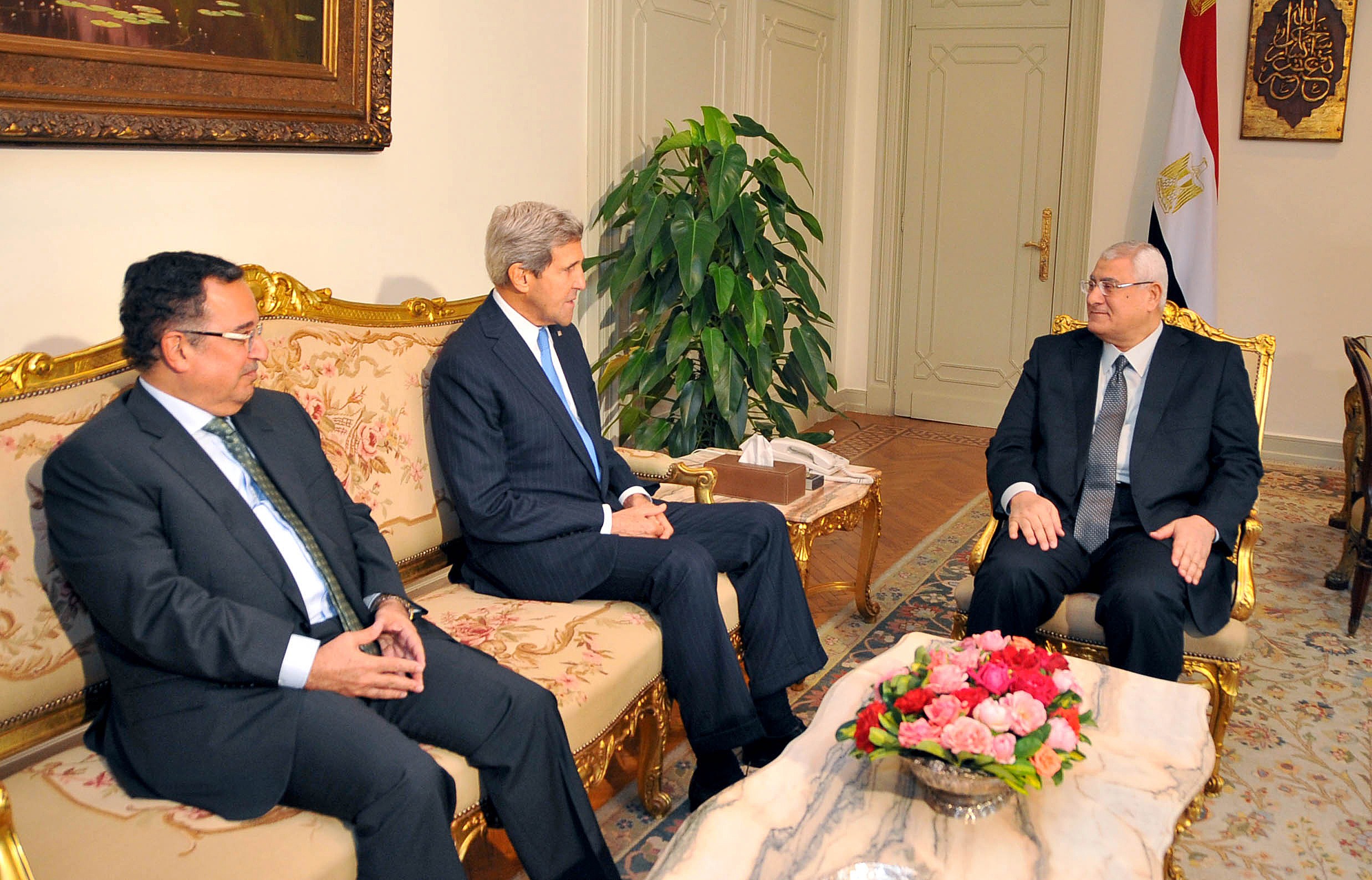 John Kerry announced on Sunday that United States President Barack Obama accepted an invitation to engage in a strategic dialogue with Egypt.

Kerry’s announcement came in a joint press conference with Minister of Foreign Affairs Nabil Fahmy following a meeting between the two at the beginning of the US Secretary of State’s unannounced visit which lasted around 6 hours. He said that interim President Adly Mansour wrote to Obama suggesting such a dialogue and that the invitation has been accepted.

Kerry praised the interim government’s implementation of the roadmap outlined by the armed forces following the ouster of former President Mohamed Morsi in July. He urged the government to continue implementing the roadmap and added that it is “not a promise to us [the US], but a promise to the Egyptian people.” Kerry referred to the controversial draft protest law, which was revised by the cabinet following widespread criticism from civil society groups.

The unannounced visit occurred at a time when the state of Egypt-US relations had become “delicate”, by Fahmy’s own admission, following the US administration’s decision to suspend military assistance to Egypt. This included delaying the delivery of military equipment such as F-16 fighter jets and Apache helicopters. The spokeswoman said the delivery of such equipment would be delayed pending, “credible progress toward an inclusive, democratically elected civilian government through free and fair elections.” Around $260m of cash was also suspended.

In the press conference Kerry said that he and Fahmy agreed that Egypt-US relations should be defined by more than the assistance Egypt receives, adding that it is a “very small issue” between the two countries and that there are “bigger issues” to address. Kerry also stressed that the decision to suspend assistance to Egypt was based on US law and that assistance in areas such as health and education continues.

Kerry stressed the need for stability to return to Egypt and highlighted that stability would draw domestic and international investments to Egypt. He condemned all acts of violence making reference to attacks on churches as well as violence involving the security forces. He added: “No one should be allowed to practice violence with impunity.”

Kerry is the highest ranking US official to visit Egypt since Morsi was toppled and the interim government assumed power. US Deputy Secretary of State William Burns travelled to Cairo and held intensive meetings with political stakeholders in August along with EU Special Representative for the Southern Mediterranean Region and foreign ministers of the United Arab Emirates and Qatar in an attempt to facilitate a dialogue between the opposing political factions. US Senators John McCain and Lindsey Graham and representatives of the US Congress Michelle Bachmann, Steve King and Louie Gohmert visited and expressed their support for Egypt’s military against “the terrorists known as the Muslim Brotherhood.”

After Riyadh Kerry is expected to travel to Warsaw, Jerusalem, Bethlehem, Amman, Abu Dhabi, Algiers and Rabat from 3 November to 12 November, according to State Department Spokeswoman Jen Psaki. In a press briefing on Friday Psaki told reporters that the “path forward in Egypt” is one of the topics to be discussed during Kerry’s tour.