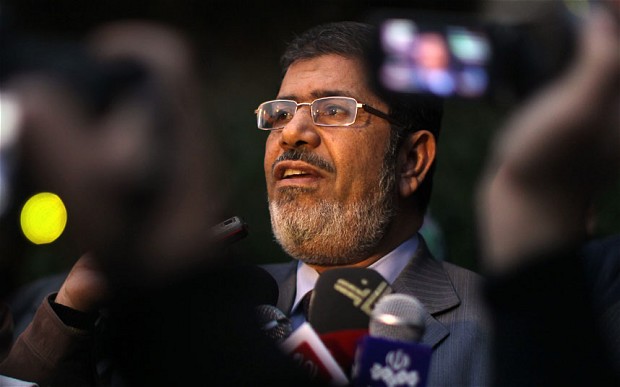 The Cairo Criminal Court is set to try former President Mohamed Morsi, along with 14 other Muslim Brotherhood members on Monday.

Morsi and the defendants face charges of inciting violence at the Presidential Palace clashes on 5 December 2012.

The court session is held in the Police Academy in New Cairo. It was scheduled to happen in Police Trustees Institution in Southeastern Cairo district of Torrah. The decision was taken by Minister of Justice Adel Abdel Hamid.

The court session will be headed by Judge Ahmed Sabry Youssef. Mobile phones and recording devices are not allowed inside the court hall.

In September 2013, Morsi was referred by the general prosecution to  the Criminal Court for an alleged role in the clashes that occurred on the evening of 5 December and caused five deaths and 693 injuries. His bureau manager Ahmed Abdel Atty, his assistant Ayman Abdel Raouf, former Deputy Chief of Staff Asaad El Sheikha, Deputy Chairman of the Freedom and Justice Party (FJP) Essam El-Erian, senior FJP member Mohamed Al-Beltagy, conservative preacher Wagdi Ghoneim, and activists Abdel Rahman Ezz, Ahmed Al-Mogheer and Alaa Hamza were also referred to court for the same case.

Morsi is the second Egyptian President to be tried  in three years. Former President Mohamed Hosni Mubarak is still on trial since 2011. Mubarak is facing charges that include the killing of protesters during the 25 January 2011 revolution, wasting public funds and the illegal export of oil.

Mubarak was released from prison in June after he spent two years in preventive detention.