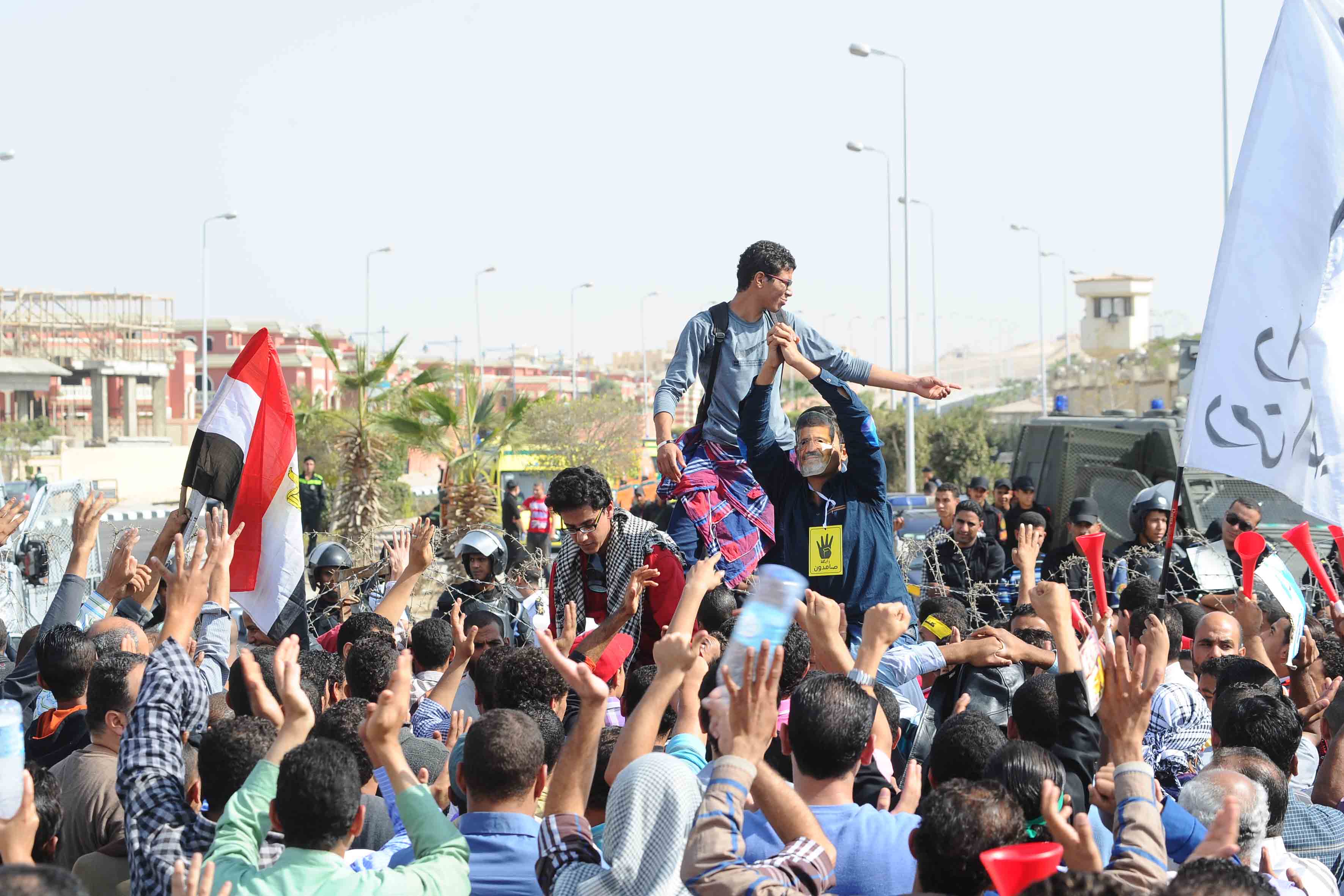 Cairo Criminal Court decided on Monday to postpone the trial for former President Mohamed Morsi and 14 other Muslim Brotherhood members to 8 January, 2014, in order to review the court case’s documents. The court also decided the continuation of the defendants’ detention.

Morsi was ordered to be transferred to Borg Al-Arab prison on the outskirts of Alexandria after the court session for preventative detention, according to Egyptian State TV.

Lawyers Mohamed Abdelaziz and Mahmoud Belal, who are civil claimants against the defendants, said the court session started at 10am in the presence of 20 civil claims lawyers and 25 lawyers representing the defendants.

By the time the session began, Judge Ahmed Sabry Youssef began calling the defendants’ names. Morsi replied that he did not not recognise the court, saying, “I am the legitimate President.” The defendants’ lawyers then chanted: “The people salute the president’s steadfastness!”

When the judge called the rest of the defendants’ names, they replied with chants of “down with the coup”, “Rabaa lives” and “down with military rule”.

The attendance of the defendants’ lawyers was submitted, except for the former president, who insisted that he did not recognise the court and asked no lawyers to defend him “with all due respect to the judges”.

The representative of the prosecution read the referral warrant when Morsi started to shout again, “I am the legitimate president!”

The court was suspended for 75 minutes, in which lawyers Mohamed Al-Damaty, Mohamed Selim Al-Awa, and Mohamed Tousson were allowed to meet the defendants.

When the court session resumed, the civil claim lawyers’ attendance was submitted and they asked the court that the Presidential Palace clashes victims be allowed to provide testimonies.

Belal concluded that Morsi did not declare a clear position regarding Al-Awa, saying that “if Morsi asks Al-Awa to defend him, this means that he recognises the court.”

Lawyers outside the Police Academy were denied access for not having official permits, they claimed. Kalyoubia Law Syndicate Chairman Mahmoud Youssef said that “despite applying for a permit to enter the court, I did not receive a permit.”

Youssef said the trial was unconstitutional, as Morsi is still the president and should be tried according to certain laws and procedures, such as standing ahead of a special tribunal and with the consent of two-thirds of the parliament.

Commenting on the claim that Morsi was being tried according to the legal principle that “people are the source of legitimacy and authority” Youssef said that “there is no referendum to prove that people were against Morsi,” adding that “Morsi supporters are demonstrating by the millions daily.”

Outside the Police Academy where journalists and pro-Morsi protesters were allowed to stand before the barricade, protesters shouted insults against the police forces and chanted against the “3 July Coup” and “General Al-Sisi”.

This later escalated as protesters turned their anger on several news outlets and independent journalists present, with numerous reports of assaults on the press.

At one point, protesters attacked an independent blogger wearing a “necklace with a cross”, according to Ahmed Ismail from the Azhary TV channel.

According to eyewitnesses, CBC satellite channel had been filming the incident when protesters attacked both its van and cameraman Ahmed Sallam with rocks amid cries of “liars” and “putchists” and “slaves of [Defense Minister Abdel Fatah] Al-Sisi”.

Daily News Egypt reporter Fady Ashraf tried to intervene, only to be attacked himself.

“I tried to stop the attack but I was grabbed by the hair and assaulted by some protesters, and got punched in the head and the stomach,” Ashraf said. “Other protestors were chanting ‘Silmiya’ [‘peaceful’] and stopped the attacking protesters.”

Meanwhile, the Anti-Coup Alliance, also known as the National Coalition to Support Legitimacy, issued a statement concerning the trial in which they “commend kidnapped President Mohamed Morsi for his resolve in the face of the coup while facing the judges of the coup, and his commitment to legitimacy and the will of the people.”

“The Alliance calls on the Egyptian masses to participate in the million man march titled ‘The World Salutes the President’s Resolve’ on Tuesday,” the statement added.