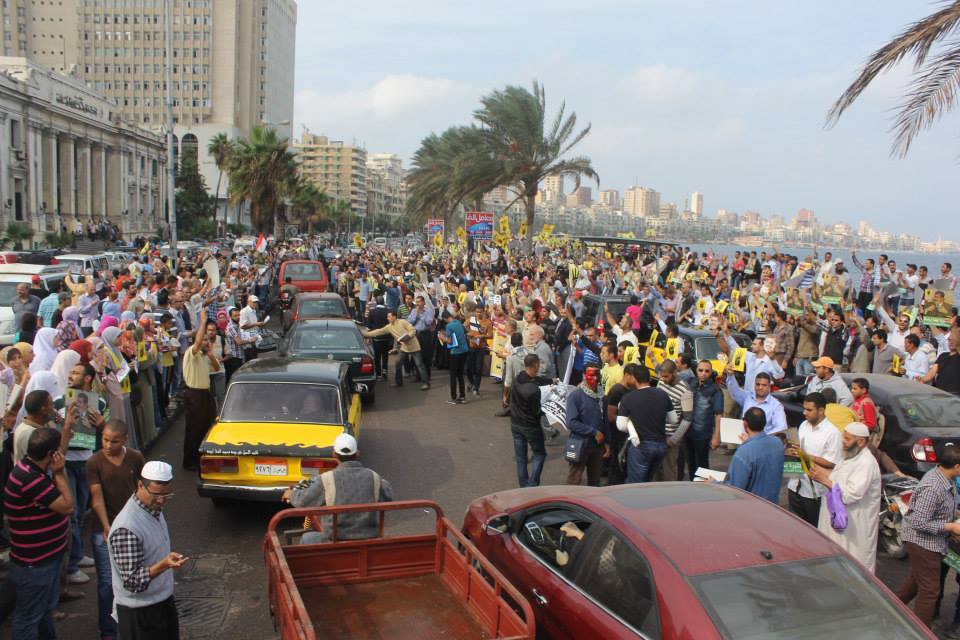 A protest against the trial of ousted President Mohamed Morsi turned violent in Alexandria after protesters were attacked by army supporters.

Pro-Morsi protesters gathered outside the court in the Al-Mansheya neighbourhood, soon to be attacked by a pro-army rally coming from the direction of Al-Qaed Ibrahim Mosque, according to the Daily News Egypt correspondent in Alexandria, Ahmed Arab.

Mohamed Ramadan, a lawyer from Alexandria, said the pro-Morsi protest was “peaceful”.

Police and army forces soon arrived at the scene firing teargas to disperse the rallies, Arab said. They then began arresting protesters. Ramadan said 16 protesters were arrested; all Morsi supporters.

Arab said security forces began attacking journalists, including Al-Masry Al-Youm photojournalist Tarek Al-Faramawy and himself. Arab said he was taken to a navy vehicle along with 25 other detainees, where they were physically attacked. He was let go fifteen minutes later when they discovered that he is a journalist. Arab added that his camera was confiscated.

Morsi, along with 14 other Muslim Brotherhood members, faces charges of inciting the deadly violence that occurred outside the Presidential Palace on 5 December 2012. His first trial session was on Monday; the trial was postponed until 8 January, 2014, reported Al-Ahram.

He was first held on 3 July incommunicado for several weeks before charges were finally brought against him.

The Anti-Coup Alliance, which is also known as the National Coalition to Support Legitimacy, had called on Saturday on all Egyptians to gather outside the trial of the “legitimate, elected, kidnapped [former] President Mohamed Morsi.” The alliance had issued a statement last week calling for daily protests from Friday until the set date of the trial, under the name “Trial of Popular Will”.

Ministry of Interior spokesman Hany Abdel Latif said there is a comprehensive security plan for Monday and that security is on alert in all governorates and on all highways.

The Ministry of Interior said Saturday that it will use all means possible to prevent “chaos” that might stem from protests announced by pro-Morsi protesters.