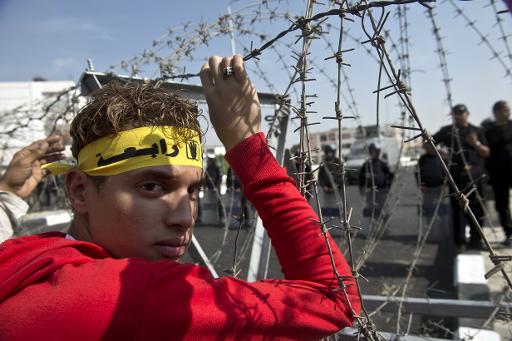 Supporters of ousted President Mohamed Morsi blocked Cairo’s Ring Road on Monday while demonstrating against the trial, which they believe to be illegitimate.

Thousands gathered outside the Supreme Constitutional Court chanting slogans against interim Minister of Defence Abdel Fatah Al-Sisi and the Ministry of Interior. Protesters chanted at the gates of the court behind which police and military personnel were visible. The demonstration continued peacefully.

Following midday prayers the demonstrators began to march north on the Corniche, beating drums, singing and changing as they marched. Upon reaching the Ring Road, one of Cairo’s major highways, the protestors split and ascended the ramps to the Ring Road, blocking traffic in both directions.

Ahmed Mohamed, 32, was among the marchers on the Corniche. He expressed his dismay at the current situation in Egypt. “Where is the democracy? Why is my vote being ignored? Why did we carry out the 25 January Revolution?” he asked. “We are freely expressing ourselves in the thousands and rejecting the coup and all that is happening now, including the media that feeds us lies.”

Sayed Mohamed, who wore yellow and black face paint symbolic of the dispersed Rabaa Al-Adaweya sit-in, decried Monday’s court proceedings. “Our democratically elected president is being tried now, and for what? Why do they keep killing us? This country needs to belong to all of us,” he said.

Morsi, along with 14 other members of the Muslim Brotherhood including Mohamed El-Beltagy and Essam El-Erian, appeared in court charged with inciting violence and murder outside the Presidential Palace in December 2012. Ten people died and hundreds were injured when Morsi’s supporters clashed with his opponents outside the palace walls.

Morsi refused to recognise the court and following some disruptions, the trial was postponed until 8 January. The former president will remain in custody.