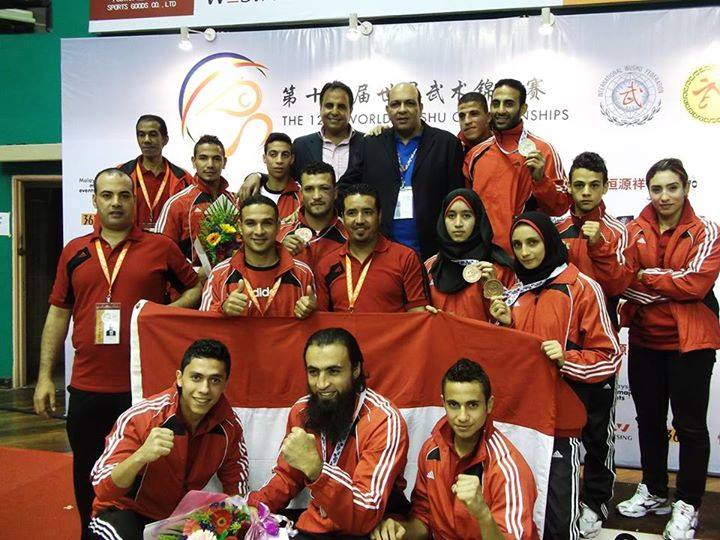 The Egyptian Kung-Fu team gained six medals in the sport’s World Cup held in Kuala Lumpur, Malaysia between 1 and 5 November.

Hesham Abdel Hamid earned the silver medal in men’s Sanda system 90 kg competition after being defeated in the final by eventual champion Chinese Bian Qingge. In a repeat of the recent controversy stirred by former teammate Mohamed Youssef at the Sports Accord Combat Games competition in St. Petersburg Russia on 27 October, Abdel Hamid raised the four-finger Rabaa sign after winning his silver medal. Kung Fu federation executive manager Gamal Al-Gazzar said in a phone call with the Dream Satellite channel that the player “will be punished, as we have warned the players not to raise any political or partisan signs.”

The Kung-Fu society in Egypt was in controversy in October after Youssef and the Egyptian Kung-Fu Federation were both referred to interrogation by Minister of Sports Taher Abuozeid on 29 October.

Youssef was banned by the federation from participating in the Kung-Fu World Cup in Malaysia and sent back to Egypt.

In the Women’s Sanda system 48 kg competition, Mayada Ali shared the bronze medals with other semi-finalist, Junita Malau from Indonesia.

Egypt shared 14th place in the championship with India and Italy, with the eventual champion being China with 18 medals, 17 of them gold.

The two runners-up were Iran and hosts Malaysia.