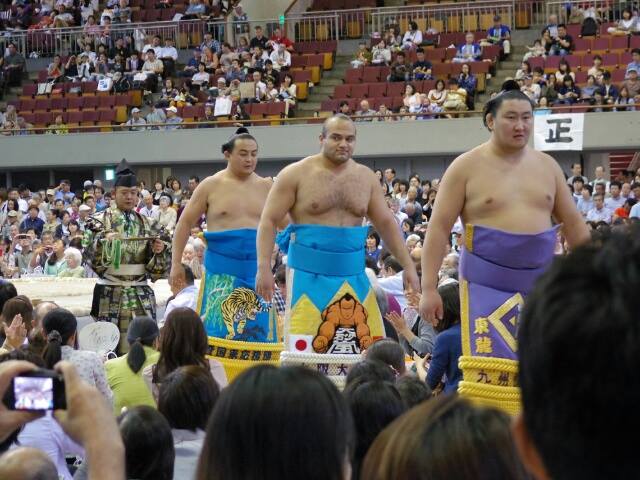 Last week, 21-year-old 1.89 m Abdelrahamn Shaalan made history by becoming the first Arab and African Sumo wrestler to be promoted to the “Makuuchi” division, the top division of professional Sumo.

Makuuchi, which is comprised of 42 elite Sumo wrestlers, represents the most difficult and competitive of all divisions. Wrestlers are promoted or demoted before every major tournament. Shaalan, also known as “Osunaarashi”, which means “the big sandstorm”, has been in intense competition to join the ranks of the Makuuchi competitors. He has lost only two matches in the eight tournaments since his debut in March 2012, making him the fastest foreign wrestler to ascend to the much-coveted top divison.

Currently residing in Koto-ku in Tokyo, Shaalan, who was promoted to this classification on 28 October at 146 kilograms, is in awe of his rise as reminds himself of how it all began.

How did a young boy in Egypt make it all the way to the top categories of Sumo wrestling?

I grew up in Mansoura where we did not even have a gym. When I was 15, a makeshift gym opened in a village nearby. I have always been interested in sports and my father encouraged me to pursue what I liked. In this gym, I met a police officer who played with the Police Federation Sumo team. He told me I had a body that fit the game. I was 120 kilograms at that time, with a body-builder’s body.

How did joining the federation affect you?

The first time I went to the club where they train, I found the players half my size. The coach at the time told me to give it a try on the matt. I was sceptical and told him, “I will kill him [out of sheer size].” The coach insisted. I found myself being thrown around by a guy who is barely 70 kilograms, over and over again; I did not have the athletic culture of the game. I started training and reading online about Sumo, the history, the techniques to enhance my knowledge of the game. Then I started competing as an amateur then as a professional and winning [the heavyweight gold-medal at the national championships] in Egypt in 2008 and abroad [in the world championship tournaments].

Was your moving to Japan planned?

It was my dream to move to Japan. I found out that only seven Japanese Sumo clubs are allowed to have a foreigner each to compete as part of their teams.

After competing internationally, I started meeting international coaches. When I expressed my intention of becoming a professional wrestler in Japan, many mocked me and questioned my ability to do it. Some said, “Why would an Arab, a Muslim want to live in Japan?” Others ridiculed of me, calling me a “terrorist” who would only cause trouble.

However, the head of the Dutch Sumo Federation Stephan Gadd took an interest in me, telling me, “You have shown that you are serious about Sumo and I want to help you.”  I was 19 years old, which is considered old for Sumo wrestlers. My chances were slim, but [Gadd] knew I loved the game. He wanted to meet my parents and to arrange for my travel to Japan. We set a date which coincided with the 25 January Revolution. It was chaotic and my mother was quite scared because we had to drive Gadd from the airport to Haram which meant I had to pass by Tahrir Square. Captain Ahmed Khalifa, head coach of the Egyptian National team, helped me get safely to Haram where he met my parents and the details of my travel were set.  I was to spend seven days in Japan training with the wrestlers and being observed by club scouts.

How did your parents react to the news that you wanted to move to Japan?

My father told me to pursue what I want, since it’s my life. My mum cried, wondering why I wanted to leave them, but I told her how much I loved the game and saw a future for me [as a professional wrestler].

How did it go in Japan?

It was nerve-wrecking. It was the first time I trained with Japanese wrestlers. Their training was different and much more difficult. During the first six days, none of the scouts were interested in me. Then, because of the excessive training, I tore one of my muscles. I was in severe pain, yet I insisted on training. It was at the end of the last day when one of the Japanese coaches approached me, told me to shower, eat and to come see him in his office. I could not believe it. He told me he noticed how I insisted on training despite my injury and he would like to offer me a place in the club where he trains. Now, I live in Japan training with Coach Otake Oyakata.

Our day starts early at 6am. We spend half an hour doing stretches and then special exercises to strengthen our lower bodies; then we have matches among ourselves with the same intensity as a competitive match. We can have up to 30 matches a day, and the training usually lasts between six to seven hours daily.

What are the main challenges of living in Japan?

Where I live, the Japanese people cook almost everything using pig meat or grease. [Being a Muslim], I cannot eat this. Also, I have only travelled back to Egypt once since 2011 [because of the competitions].

What will you do when you retire?

I will return home, spend time with my family and hopefully help spread knowledge about Sumo in Egypt.