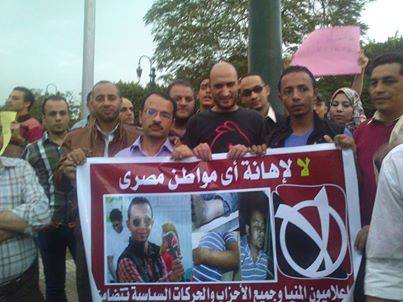 The choice between security and dignity is no longer acceptable, said Al-Nour Party Spokesman Sherif Taha.

Speaking on behalf of the Islamist, Salafi party, Taha condemned the torture allegations reported by detainees recently. He called for “categorical” investigation into such cases and for holding accountable those who commit such acts “regardless of their positions”.

“Security apparatuses should work within the context of respecting the laws, people’s humanity and citizens’ dignity,” Taha said in a party statement released on Thursday.

The spokesman referred to MBC Masr correspondent Aslam Fathy who was allegedly tortured by policemen from Al-Bandar Police Station in Al-Minya over a week ago.

Fathy had told the Daily News Egypt earlier this week that he was near Al-Mahata Square, where he got into an argument with a police officer who prevented him from covering a breaking story taking place at the time despite confirming that he was a journalist.

Fathy, who said he received a beating from the officer, was then dragged to Al-Bandar Police Station where he was allegedly beaten again and tortured. The journalist pressed charges against the officers who he claimed assaulted him.

A source at the Ministry of Interior said a complaint was filed and that it is currently being investigated by more than one authority.

The Arab Network for Human Rights Information (ANHRI) condemned “the heinous torture” Fathy was allegedly subjected to on Monday. ANHRI said fabricated charges of resisting authorities and assaulting a police officer were brought against Fathy.

Al-Nour Party’s spokesman also referred to the case of a group of 21 women who were arrested by security forces in Alexandria over a week ago for ‘blocking the road’. The activists were protesting against the 3 July ousting of former President Mohamed Morsi at the time of their arrest. They were allegedly subjected to pregnancy tests, according to Haitham Abu Khalil, director of the Victims Centre for Human Rights.

Taha said that news of both alleged torture incidents bring to mind the case of Khaled Said, who was tortured to death at the hands of the police in 2010. Said’s death was seen as one of the early sparks of the 25 January Revolution.

“In respectable states, the occurrence of such incidents is enough cause for seeing the cabinet resign,” Taha said. He added that such incidents increase the people’s anger against the authorities and weaken the latter’s support base.