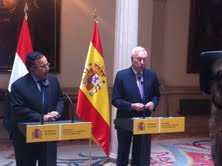 The Spanish government has decided to exclude South Sinai resorts from its travel alert on Egypt on Thursday during talks between the foreign ministers of the two countries.

The Spanish government also decided to reduce the level of warning to Cairo, Alexandria, Luxor and Aswan, as well as to cities overlooking the Red Sea. The travel warning for the rest of the country was eased as well from “absolute ban” to “travel when necessary.”

Foreign Minister Nabil Fahmy held his first bilateral talks with his Spanish counterpart, Jose Manuel Garcia-Margallo during his two-day visit to Spain that began on Thursday. The Egyptian and Spanish foreign ministers held a joint press conference on Thursday.

Fahmy said they discussed relations between the two counties. He addressed the “positive developments” Egypt is witnessing including the end of the state of emergency on 14 November and the government’s implementation of the roadmap. He also discussed the referendum on the constitution, which is expected to be held soon and will be followed by parliamentary and presidential elections.

Garcia-Margallo stressed the depth of ties between the two countries and Spain’s support for a participation by everyone in the democratic process.

Fahmy pointed out that there are regional and international issues that concern both countries including, the Syrian crisis and the Palestinian issue in the light of ongoing talks between the Palestinian and Israeli sides.

Fahmy also invited the Spanish people to visit Egypt as a “safe, open country that welcomes everyone.”

On Friday, the minister is expected to hold talks with representatives of the Spanish Confederation of Business Organizations.

A state of emergency and curfew were enacted in 14 governorates in Egypt on 14 August after violent dispersal of sit-ins by supporters of former President Mohamed Morsi. The state of emergency expires on 14 November and the government does not intend to extend it past that date. The curfew is also scheduled to be lifted on the same date. Garcia-Margallo told Fahmy during their talks that Spain intends to further ease travel restrictions when the state of emergency is lifted.