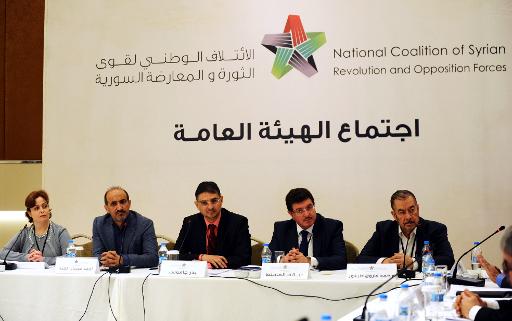 AFP-  Syria’s fractured opposition began meeting Saturday in Istanbul to decide whether to attend a peace conference that world powers want to hold in Geneva.

The talks involving the main umbrella opposition, the National Coalition, took place in a hotel here as the rebels retook a strategic base in northern Syria.

They were due to continue through Sunday evening, the coalition said.

Before they decide whether to attend the peace conference — aimed at launching negotiations between President Bashar al-Assad’s regime and its opponents — bitter rival camps in the opposition must first seek a united front, UN-Arab League envoy Lakhdar Brahimi warned earlier this week.

“There should be two delegations from Syria for Geneva 2 — the government and the opposition,” Brahimi said Tuesday. But, he added: “The opposition is divided and not ready… The opposition has problems.”

The National Coalition — which depends on foreign backing — has long been plagued by regional rivalries and suffers from a lack of credibility in the eyes of both its allies and the various rebel groups fighting on the ground.

Some rebel leaders believe that no negotiations are possible with Assad remaining in power and have for weeks resisted the idea of peace talks.

Assad is showing no sign of backing down, two-and-a-half years into a conflict that has claimed more than 120,000 lives.

No date has yet been agreed for the conference, dubbed Geneva 2, at which world powers hope to gather delegates from the warring parties, as well as regional Arab states, before the end of the year, according to Brahimi.

“We are leaning towards not taking part in the conference,” said Samir Nashar, a member of the Coalition. “Will that position change? I don’t know, but what I can say is that there’s intense (international) political action (pushing towards participation).

“In politics everything is possible.”

Coalition leader Ahmat Jarba has imposed strict conditions for the opposition to take part, insisting that Assad’s departure and regime change are on the table — which the regime has rejected.

Jarba is also demanding a ceasefire for the duration of the talks.

The Syrian National Council — a key component of the Coalition — has outright refused to take part in talks, threatening to quit the Coalition if some of its members agree to go.

Damascus too has appeared unwilling.

Information Minister Omran al-Zohbi said this past week the regime would refuse to go if it was “to hand over power as desired by [Saudi Foreign Minister Prince Saud] al-Faisal and certain opponents abroad”.

Meanwhile Russian vice foreign minister Mikhail Bogdanov said that some opposition members have accepted an offer of informal talks in Moscow to precede the Geneva conference.

The opposition has “rightful hesitations” about Geneva 2 including its format, and the future role of Assad, Turkey’s foreign ministry said this week.

At a meeting of foreign ministers in Britain last month to help pave the way for Geneva 2, 11 Western and Arab nations from the Friends of Syria group agreed that Assad should have no role in any future government.

Their affirmation nevertheless failed to convince the rebels to commit to Geneva.

A monitoring group, the Syrian Observatory for Human Rights, said Saturday that Syrian rebels have regained control of a strategic base near Aleppo international airport in fierce fighting that left more than 50 people dead.

Troops backed by fighters from Lebanese Shiite militant group Hezbollah had recaptured large parts of Base 80 outside Syria’s main northern city in an assault on Friday morning.

But rebel fighters, among them Al-Qaeda loyalists, counter-attacked after dark, using Grad rockets against the army’s tanks and recovering all of the lost ground, the observatory said.

The watchdog’s director Rami Abdel Rahman said the fighting had left at least 53 people dead, 33 on the rebel side and 20 on the government side.