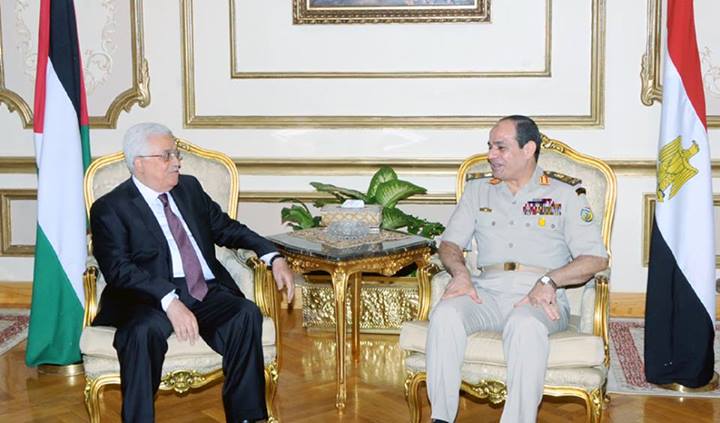 Abbas led a delegation to Cairo on Saturday, marking the beginning of his three-day visit. This is his second trip to the Egyptian capital after the ouster of former president Mohamed Morsi on 3 July, having held talks with Mansour in Cairo on 29 July.

Al-Sisi affirmed during his meeting with Abbas that Egypt will always support the legitimate demands of the Palestinian people and their right to establish their own independent state.  Abbas and Al-Sisi discussed recent regional developments and their effects on the Palestinian-Israeli peace process and stability in the Middle East.

This visit comes after the Palestinians and Israelis agreed to come to the negotiation table in July, following US diplomacy efforts.

Foreign Ministry Spokesman Badr Abdelatty said, “We are like Palestine in that we are sceptical of intentions of Israelis and future conclusion of these talks, especially in light of settlement activities in the West Bank and East Jerusalem and the recent actions by settlers and security forces.”   He added that this meeting is normal to come in light of full coordination with Egypt and the current negotiations.

Political expert at Ahram Centre for Political and Strategic Studies Mohamed Gomaa said the point behind the visit is for the Palestinians to get Cairo’s backing in the negotiations, adding that Egyptian scepticism is “justified.” He said Israel wants to keep its settlements, Jerusalem and the Jordan Valley without resolving the refugee problem and with the “Palestinians recognising Israel as a Jewish country.”

Gomaa said it is unlikely that the talks will lead anywhere in the light of the Israeli position, “unless there is a new Palestinian concession.”

US Secretary of State John Kerry said while in Bethlehem last Wednesday that “the position of the United States of America on the settlements is that we consider now and have always considered the settlements to be illegitimate,” according to a press statement by the Department of State.  But Gomaa does not believe that there is a US desire to exercise pressure on Israel.

Kerry announced a contribution of $75m to Palestinian infrastructure, a move described by Gomaa as “political money.”

Abdelatty said despite this scepticism Egypt still supports the talks, adding that they should be taken seriously and conducted within the agreed timeframe of nine months.

Egypt’s Foreign Ministry has reaffirmed, on several occasions, Egypt’s position on Palestinian-Israeli talks: “That the Palestinian-Israeli negotiations are serious, that they follow the agreed timetable and that they lead to the establishment of an independent, sovereign, and viable Palestinian state based on the June 1967 borders with East Jerusalem as its capital.”

Abbas’s visit is also set to include talks on the reconciliation efforts between Palestinian rivals Fatah and Hamas.  Fatah, the largest faction in the Palestinian Liberation Organization which is chaired by Abbas, and Hamas, which rules the Gaza Strip, have been involved in a war of words in recent months, affected by the polarisation in Egypt. But divisions between them date back to 2006 when Hamas won the parliamentary elections.

Gomaa, however, believes that talks on reconciliation will be marginal because Cairo knows that the Palestinian rivals have yet to develop a “mature” position on the matter.

“Cairo wants Hamas to take the first step, which is unlikely because Hamas is in an extremely weak position,” he said. Fatah wishes to impose its own terms because of Hamas’s perceived weakness, he added, an image Hamas wishes to counteract.

The situation in the Gaza Strip, which has been under air, sea and land blockade since 2007 continues to worsen. The Gaza Power Plant shut down on 1 November and the current electricity supply in the strip is 30% of the amount needed. Hospitals, water facilities and sewage facilities have been affected.