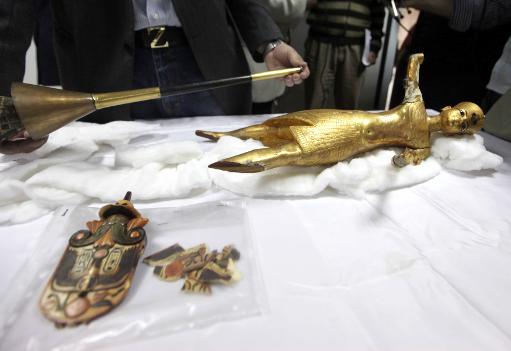 AFP — Egypt said Sunday that it has recovered 90 ancient artefacts that were put on sale by a Jerusalem auction house, and has asked Israel to find other antiquities and return them to Cairo.

The ministry of antiquities said it had asked Israeli authorities to intervene after “spotting in recent weeks a sale of 110 ancient Egyptian artefacts on the website of an auction house in Jerusalem”.

The auction house was unable to provide documents proving who owned the items and Israeli authorities banned the sale, the ministry said, ordering 90 of the 110 artefacts to be returned to Cairo.

Egypt “will ask the Israeli authorities to investigate and find pieces that have already been sold so they can be brought back to Egypt,” the ministry added.

Ali Ahmed, an official at Egypt’s department of antiquities, said several ancient Egyptian artefacts were reportedly seen in Israeli auctions and that Cairo had taken legal steps to recover the stolen items.

In October, the ministry said it had received an assurance from online auction site eBay that it would not sell artefacts that had been illegally taken out of Egypt.

During the 2011 uprising that toppled longterm ruler Hosni Mubarak, several museums were pillaged, including the Museum of Egyptian Antiquities near Cairo’s Tahrir square, epicentre of the demonstrations.

Other museums were attacked in the unrest that followed the military’s overthrow of Islamist president Mohamed Morsi on July 3, and many items are still missing.