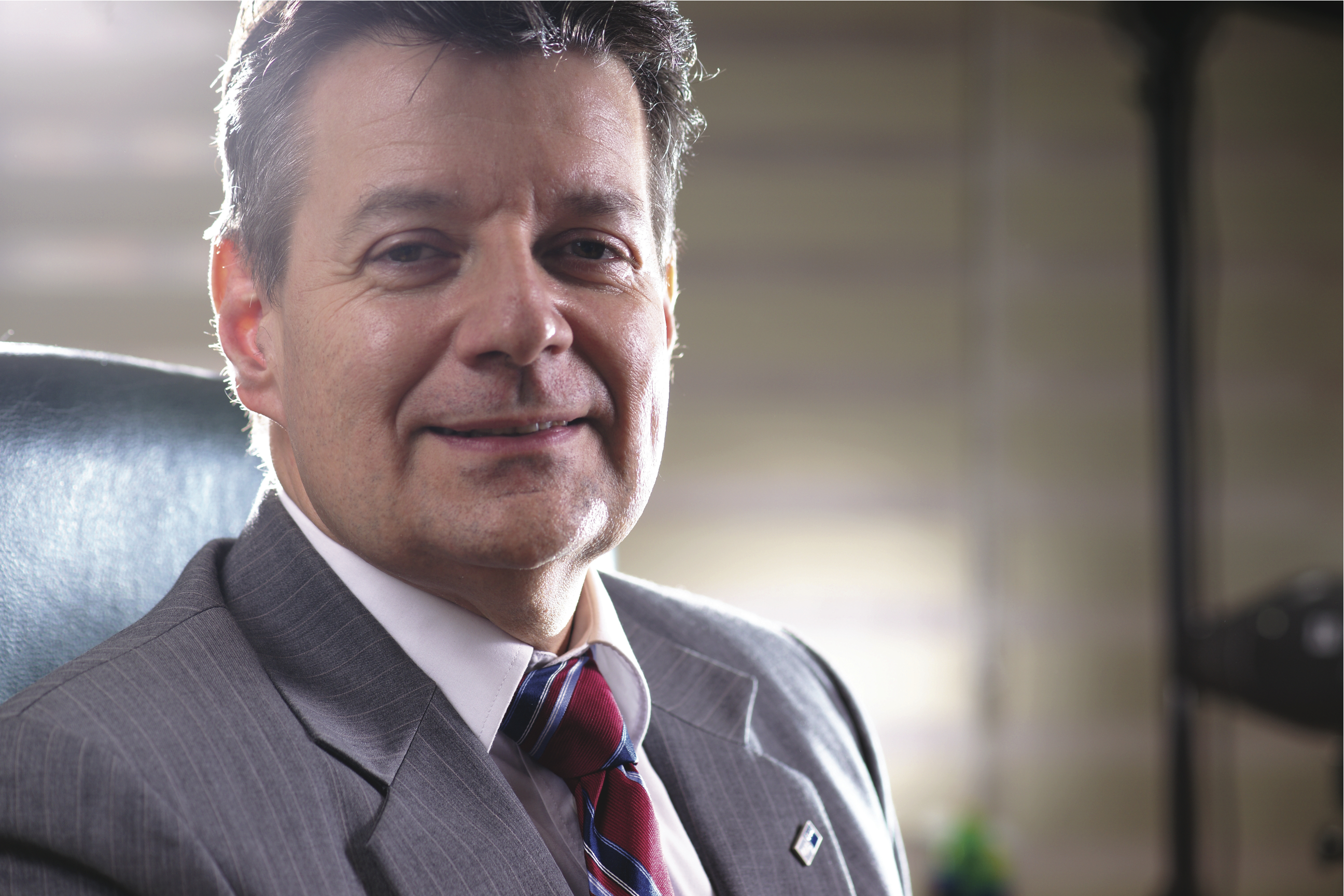 In recent months, the German-Arab Chamber of Industry and Commerce (GACIC) announced the start-up of several new projects in Egypt, including training Egyptian women with limited income and construction labourers in Luxor. The chamber has also announced that it will hold the SB13 Regional Sustainable Building (SB) conference series with the cooperation of the Department of Urban Planning at Ain Shams University and the Architecture and Urban Design department at the German University in Cairo

The Daily News Egypt sat down with GACIC CEO Rainer Herret to discuss how he sees the German-Egyptian relationship unfolding in the coming years and how the chamber was able to cope with the political turmoil and economic struggles that Egypt faced in the past three years.

How do you see the Egyptian economy developing after 30 June?

In general, it is not surprising that we evaluate the current situation as very bad for the economy for obvious reasons. We have a lack of demand in the market which has been negatively affected by the growing inflation, so that is why consumers are spending less. Also, a lot of businesses had to close down. The only companies that are doing well are the exporting companies; if they managed to keep their market, the majority of those companies managed to maintain their clients. What is important to see is that you can’t blame the political turmoil entirely as a reason [for this]. What we are experiencing here is a weakness that was in the Egyptian economy before 2011.

Too many companies are internationally not competitive and are used to protectionism: subsidies and the protective environment that the Egyptian system is giving them. And now, as the political situation can’t maintain this anymore, we hit the full effect of this negative basis.

Does that mean the both previous economic and political situations are contributing to the current economic dilemma?

What about the challenges that face the Egyptian economy in the current period?

I think that in every crisis, you have opportunities as well. I think we need security. It seems that we’re in a good way. We also need political and economic reforms. We think that the government should create a framework for the private sector. For instance, the government must establish a system of very comprehensive vocational technical training.

I’ve read recently that there is a discussion on minimum wage and there was a statement that said EGP 1,000 per month is a reasonable salary for university graduates. I would say that this is actually an insult. They also say that the minimum wage needs to be studied in accordance to the productivity efficiency and qualification, so why should the private companies bear this burden?

The answer is very simple, because for 60 years, these companies were working very profitably by exploiting a cheap work force and never investing in training people; if the workers were not productive then they have to blame themselves because they didn’t [train] them to be productive. That is the main challenge: getting this reform process going because I feel that the private sector is opposing that. They don’t want to push this one [reform] and if they don’t, the consequence will be that the government has no other choice but to keep the protective lid on the economy, because if the foreign companies come in with their trained work force, they will wipe out the national economy.

What about the government performance so far?

I think one should be fair. The government can’t solve the problems that have been developing for 60 years. I think they did very well in re-establishing security and I think you see that there is a kind of vision coming up. They are still lagging behind in drafting a real economic agenda and plan but this might be because the ministers don’t not know how long they’ll be in office.

The expectations, on the other hand, of the people are very high in an exaggerated form. This is, as well, following a rhythm of many years of propaganda where the former government was telling them [Egyptians] that Egypt had a strong economy and it is the leading national in the Arab world and that everything is bright and good. There is no wonder that now, people in the streets are wondering that if we are so strong and the corruption directs our resources to the pockets of few, now you [the government, should] redistribute. So the government is in a bad situation to tell them the truth that over the years, the overall situation has deteriorated.

Within the possibilities they [the government and ministries] have I think they are doing quite well.

What do you think of the goals of the government’s stimulus plan?

The main question is how they are going to finance it without imposing new taxes, because if you take additional money and put it in the stimulus plan it has to come from somewhere. At the same time, you want to have growth and if you impose taxes, then you kill this growth. The logic of this one [stimulus plan] is not yet clear. On the other hand, there are a lot of funds coming from the Gulf States, so that could be a solution if this money lasts. We know that if it [funds] is in the form of deposits, like Qatar, this [money] can be gone in one day so there is a factor of insecurity.

The stimulus plan itself, I think, addresses the right sectors.

What about attracting investors? How can the government attract investment with everything that is going on? And what are the facilities that the government can offer?

I think first you need to compare yourself with the competition in the region. I need to see what the other countries are offering .We have more than 5,000 German investments in Turkey and we have 700 in Egypt. I think it is very legitimate to ask this question. There you find for instance that some of these countries are offering 10 years of complete tax exemption. There are age old demands from foreign investors, such as a qualified work force, as we discussed earlier. Then we have bureaucracy, which is unbelievable. In trade we have something called non-tariff barriers such as chemical testing and special permits. Bangladesh has around 3,000 while Egypt has around 5,000 and this has grown over the years in order to protect local industries. The results now are that local industries don’t have to improve the quality because competition can’t enter the market. I think every kind of permit should be [evaluated in terms of] whether or not the country needs it.

The work permit for foreigners should also be changed. I learned from the news that official figures show that Egypt has 60,700 foreigners. What is, then, the fuss about the work permit? 90 million to 60, 000 is nothing. I think if you have a foreign investor, you’ll never get your [own] workers because that is mainly why you come to Egypt. Investors want to use Egyptian workers, but for management and the technical monitoring aspects, you need to bring your own people. So why is this restriction [in place] for the work permit for management?

Recently we’ve heard about companies that have sold their shares or minimised their activities? Has there been any similar reaction with the German investors in Egypt?

German companies have neither sold out nor increased their investments. So far, none of the German companies have closed down. They are trying to maintain their staff because they have invested so much time, money and training [in them]. But I am not sure, if the situation continues for another year, then we will come to a point where we can’t be sustained. Companies already faced problems before but things became very dramatic after 2011. Now, we have two years of ongoing chaos and problems, so sooner or later, they will say we’re very sorry but this can’t be maintained. However, right now, they are very clear that they want to stay and they want to contribute as well to the reforms and [economic] boom that everyone is hoping for.

The Daily News Egypt has previously reported on the training programmes in Cairo and Luxor that the chamber is investing in. Are there any new programmes that it is looking forward to?

We want to continue with our training programmes. The idea of these training programmes is that we team up with the local partner and the preference is given to Egyptian companies because we have a philosophy that if the local partner is putting in his own money then they will own the project. If I [foreign partner] finance it a 100%, then it is not appreciated. Our training programme in Luxor is an offspring to another one we started earlier in Cairo with the Arab Contractors. We want to continue with these projects because we feel that constructionism is a very beneficial sector.

Another project is in the furniture industry, which was also very successful. This is one of the core industries in Egypt and what they are lacking is just manufacturing the design that is needed in the market. When they teamed up with partners in Germany, they benefited a lot from understanding the type of furniture style that European customers want and were able to manufacture it. This will definitely go on. We would just like to add other sectors, such as agriculture.

We also do incorporation with the German University in Cairo in November. We will hold a conference for sustainable construction. It will discuss the renewable energy, building insulation and how it can be implemented here in the Egyptian market.

We’ve heard that the government is aiming to build new houses in the slums. Here, I could imagine another chamber project.

Are there any specific sectors that German investors are interested in?

I think it is very interesting that the government is trying to open mining to foreign companies. That, for Germany, is a highly important because we need special minerals and if Egypt would open their investment opportunities, then I am sure the country can attract additional investment from Germany because there is a demand.

The next step for Egypt’s development is creating a machine manufacturing industry.  Egypt is still importing about 90% of all machines and this is a high cost. That can be another incentive for German companies to manufacture here and to use Egypt as a hub for the region.

Other service providers will be interested to offer training programmes as well.