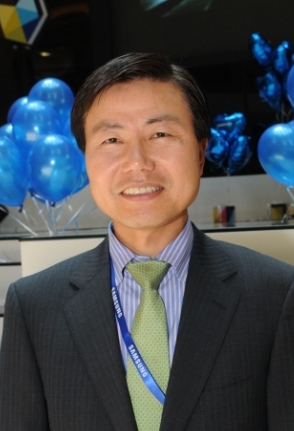 Following the launch Of the Samsung Note 3 and the Samsung Gear Mid-October at City Stars, the Daily News Egypt sat down with Duke Park, the General Manager of Samsung in Egypt, to discuss the tech-giant’s experience in Egypt, the competitive environments among technology companies and the company’s future plans including their new production facility in Beni Suef.

What is the reason behind this market share gain that Samsung witnessed in Egypt?

Samsung focuses on detail marketing. We try to develop our products to meet customers’ needs and we try to co-work with our partners in Egypt to develop these products.

How can you describe Samsung’s presence in Egypt?

We have one new factory in Beni Suef and currently we are producing only televisions and monitors, however we have a plan to expand our factory to include the production of home appliances. We recently opened the Samsung experience shop and actually we have around 70 Samsung brand shops in Egypt.

We have seen some sectors struggle in Egypt due to the political turmoil. Have tech companies experienced the same challenges?

We have the same struggles. The difficulty was mainly in the changeable Egyptian pound/dollar exchange rate. With this kind of turmoil and instability we’ve noticed that the demand decreased a lot. People don’t want to buy products, so that made the situation more difficult than before.

How would you describe Samsung’s revenues in Egypt during the past year?

Our profits are increasing every year even though Egypt has been going through a revolution. Our gross rate increased by more than 40% and for this year Samsung is expecting more than $700m [in revenues].

There’s a fierce competition between tech-companies worldwide. How would you describe this competition in Egypt?

There are many tech companies globally but in Egypt our competitors are companies that have factories in the country.

We know that Samsung is currently building a factory in Beni Suef. How much would building this factory cost?

Why did you choose Beni Suef and how many employees are working in the Beni Suef factory?

We conducted several studies before selecting the location for more than three years, learned that the Egyptian government has a plan to develop Upper Egypt, so Samsung tried to align with the government project. Also, when we visited Beni Suef, we thought it was one of the best places for several reasons. The first was that it is very close to Cairo. Also, we would have easy access to the Suez Canal and Port Said as well as Alexandria and that will facilitate the process of exporting to other countries.

I am not sure about the exact number of Egyptians working in the factory but I think they are over 800.

What countries do you think this factory would feed?

Are there any future expansionary plants?

We are focusing on the Beni Suef plant. From next year, we are going to make more investments to increasing the manufacturing lines such as the panel assembly line. We are developing local products with local content.

Would the factory be just for assembling or will you manufacture products from scratch?

No, we are developing products from scratch and then assembling them. After we develop the panel production next year, products will have more than 80% of local content.

Are there any local banks that are financing the building of the Beni Suef factory?

We are using our own financing and not relying on bank loans.