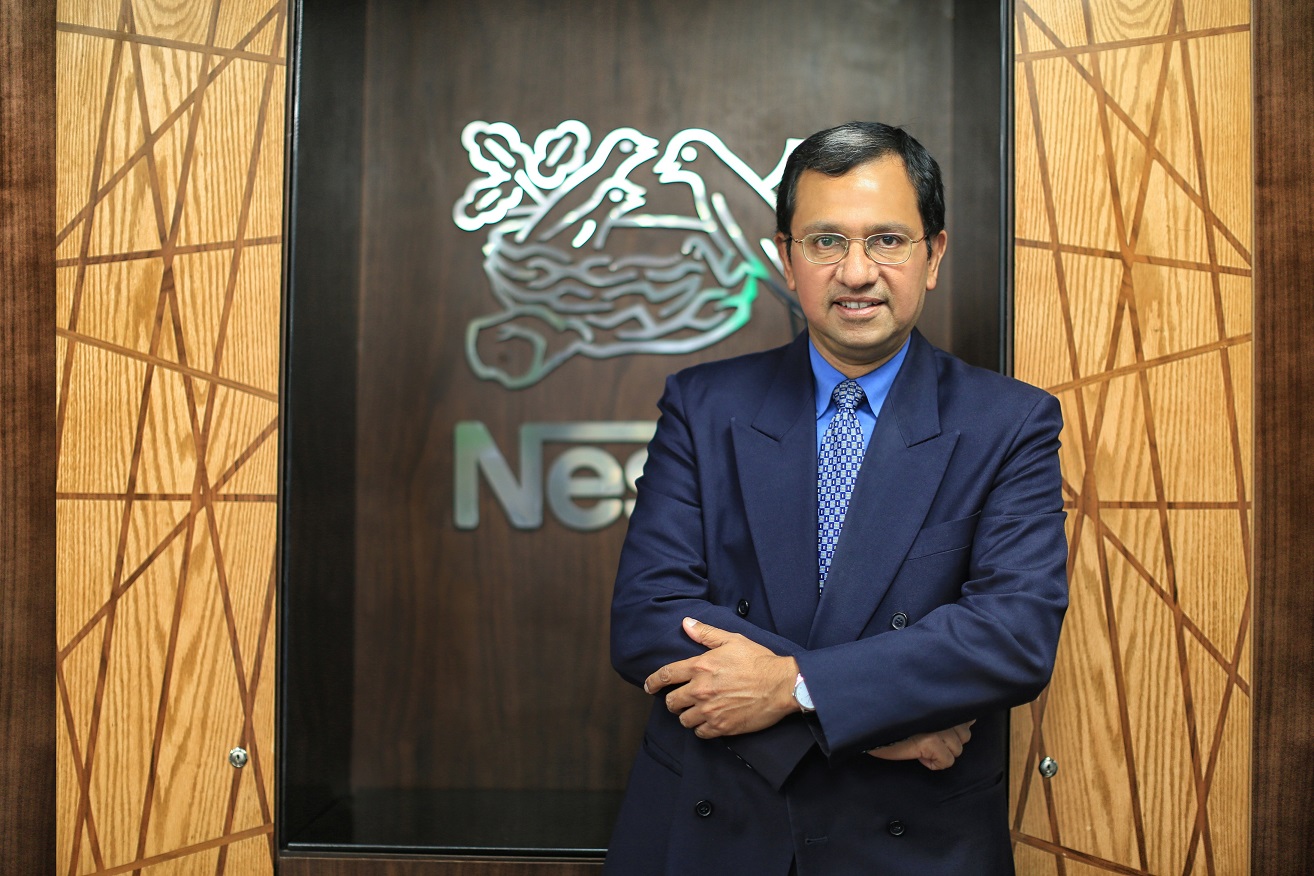 Earlier in October Nestle Egypt announced the expansion of their ice-cream facility as part of their previously planned LE1 billion investment in the country. The company, which besides their headquarters has three factories and ten distribution centers, assured that they are determined to continue their growth in Egypt

The Daily News Egypt interviewed the Chief Executive Officer and Chairman for the largest international food and beverage company in Egypt, Suresh Narayanan, to discuss the company’s latest accomplishments, development plans and future in the Egyptian market, as well as the struggles the company faced when their water facility in Banha burned down.

In 2011, Nestle announced LE1 billion in investments to expand Egypt-based operations to meet rising demand and create new opportunities. How has the developments of these investments been?

First allow me to give you a brief history of Nestle in Egypt. We have been in Egypt for a long time, since 1868. We are 145 years old in Egypt. The relationship with Egypt is very old and much respected. Our investments are born out of this fact so despite all that has happened in the country, our level of confidence and commitment to the country remains very strong. I am happy to say that the LE1 billion investment that was announced before all this happened has been fulfilled completely in the last three years.

I would say we have invested almost all the LE1 billion in expanding our capacity and distribution capabilities, along with the skills and competence of our people. Ultimately I would say that organizations develop love for countries because of the performance that countries give. I think this is something that I am proud of. I am very proud of the Egyptian team.

How many Egyptian workers does Nestle employ in Egypt?

We have 3,000 employees, of whom over 99 percent are Egyptians. It is entirely an Egyptian corporation. I am also very happy to say that in these last three years, we are one of the few companies that can say we have had zero industrial relations incidents.

How has supply and demand for Nestle in the market been affected by the difficult political conditions in Egypt?

No matter what your political or religious beliefs are, you have to eat and drink. During times of uncertainty, there are times where people tend to stock up because they fear that shops won’t be open and products will not be available.

This happened to us when the revolution started in 2011. We had one or two months when there was literally a run on the company’s products because people were stocking up. We were able to cater to that demand. Over a period of time this behavior has stabilized and now, in the recent disturbance that has taken place, we have not witnessed dramatic changes in people’s behaviors. People got used to whatever is going on.

The demand has continued to be fairly strong during these years. The company has definitely grown and that is why we made these investments. That is why also we commissioned an expansion for the ice-cream factory in 6th of October City. That factory has equipment that is one of a kind in the world. We are also bringing technology along with the investments. This facility created around 200 to 300 more jobs.

How was Nestle impacted by the fire in the water factory and are operations back to full functionality?

Adversity always builds strength. The factory was suddenly burned down. We went from supplying water across the country; we came to a situation where we couldn’t supply anything. One of the fastest turn-around times of any factory, to start up operations in the world, was achieved in the Nestle water factory in Egypt. Within two months the gallon-making machines were imported and installed to start operation once again. New capacity expansions have been taking place and we have created a fresh factory.

During the past couple of weeks we went back to having full supply in the market. This has been a tremendous example of team work. In Banha and in the community, where our workers are from, they came together and worked along with other Nestle employees from Turkey, France and Dubai to put up this facility in record time.

But it was painful for us as a company. There were consumers who were unhappy because there were also other practices that were happening in the market and some started raising the prices.

How about the losses that the company witnessed during that period?

Let me put it this way, the loss was significant. It was not just in the machinery. We were completely out of the market for four to five months….I cannot just give you a figure because it wasn’t just the machinery loss but also the business loss. Having said that, I think we are a large enough organization to be able to withstand that storm. It wasn’t easy but we are back in the game.

We know that Nestlé celebrates its image in promoting healthy food, how do you believe this has been achieved in Egypt?

The vision of the company is to be a reference for nutrition and health across the world. This basically means that we want to be the company that talks and gives nutrition, that promotes good health and promotes well-being for all human beings and even pets. Over the past years the products that we have launched onto the market had to satisfy the first principle of quality and nutrition. If they are very bad nutritionally in term of the fat content or the carbohydrates we typically would not even launch these products.

We realize that in a country like Egypt there are serious health issues. The country has big problems of obesity. Almost one third of children are anemic. Women are anemic as well and 82 percent of deaths are due to non-communicable diseases.

We maintain this image through two approaches. The first is through the products that we launch on the market, whether milk or dairy products. The second is our concept of “creating shared value.” This basically means that we believe that Nestlé would succeed only if the community prospers.

How has the “creating shared value” concept been incorporated in Egypt? What projects are Nestle involved in?

We have partnered the farmers, suppliers and local communities in joint programs that are not charity. We don’t issue cheques to people and say “go spend this money.” What we say is, let us have a partnership and do something good for society.

In 2010 we launched with the Ministry of Education what we call the Nestle “healthy kids program.” It is basically a global program that is being applied in over 60 countries and it focuses on primary school children. It is the simple concept of “catch them when they are young”–when they are young, teach them about nutrition, healthy habits and healthy eating so that when they grow up they know all this information, rather than just telling them when they are 20. It is also a measure of trust from the Ministry of Education that they signed a five-year protocol with us [Nestle].

Today we are conducting nutrition education programs under the banner of the “healthy kids program” in almost 150 schools and we have reached out to 150,000 kids. We hope to reach half a million kids by 2015 and a similar goal is to try and educate wives.

As a result of that we are about to launch the women’s training program that will start hopefully early next year. It will be a pilot trial where we will take particular geographies and conduct these programs, calling groups of women who are mothers and young housewives, who have concerns in terms of what to feed the children, how to bring them up, and what are the common health issues and so on… Again, we are promoting this as something that is good for the country

Where would these meetings or discussions take place?

This would be for example in the Delta area such as Mansoura. Our specialist will be there and we are going to meet at the women’s community center and the youth centers.

Sometimes we [Egyptians] have these mistaken conceptions. We think only the educated want to know about nutrition education. This is short-sighted because in fact the less fortunate and the less educated are sometimes the most concerned.

We also have another project which is called project WET, which is water education and conservation, where we will target teachers. It is fair to say that this part of the world will be stressed for water before oil runs out. This is going to be a key challenge area. We’ll train teachers on water conservation projects and initiatives and through the teachers we can go to hundreds of children. I hope this allows people to understand and learn about the water wastage that takes place in Egypt.

We’ve heard about some companies decreasing the volume of their investments due to the political tension. Is this possible for Nestle?

Ultimately what will be invested in any country depends on how well the company is performing in a country and how welcoming the government is toward investments. There is no reason why Nestle would exit the Egyptian market. You can’t ignore Egypt geo-politically or in terms of the market.