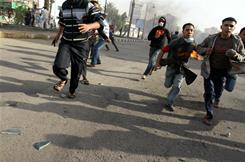 Prosecutor General Hesham Barakat appealed the 12 September Suez Criminal Court verdict, which acquitted all defendants accused of killing protesters in Suez during the 25 January Revolution, to the Cassation Court on Sunday, according to Aswat Masriya.

Civil Claimant lawyer Helmy Morsy told Aswat Masriya that the families of the deceased filed a complaint to the Prosecutor General against the court verdict. The complaint led Barakat to file an appeal against the verdict to the Cassation Court.

The families of the Suez victims have vowed to exact “revenge if the court does not grant retribution” in a previous session of the same case on 1 June 2013.