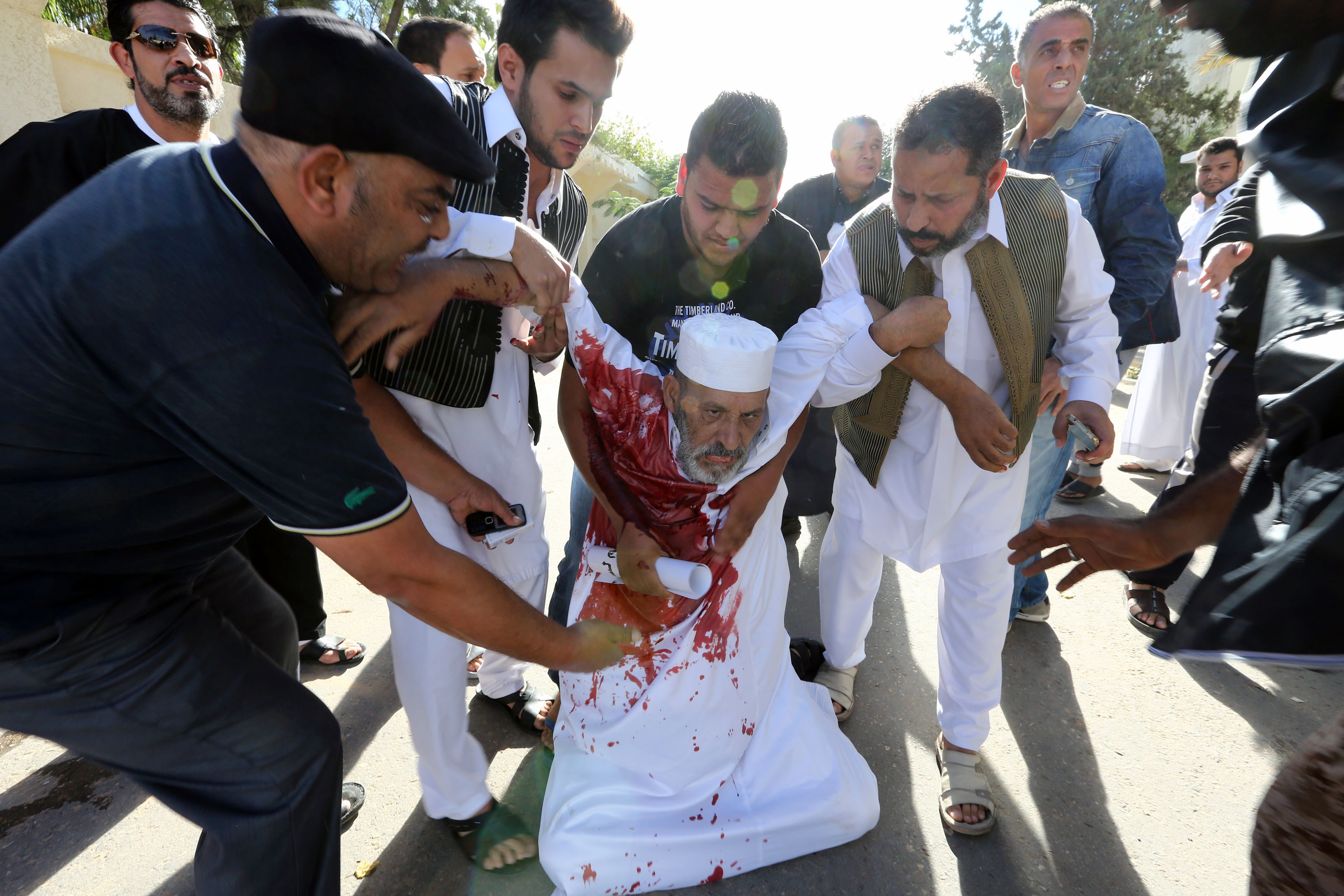 AFP – Fresh clashes erupted in Tripoli on Saturday, officials and witnesses said, as the death toll from an anti-militia protest in Libya’s capital rose above 40 and the government appealed for restraint.

More than 400 people were also wounded when Friday’s protest degenerated into armed clashes in the capital that continued through the night, Justice Minister Salah al-Marghani said.

He said the death toll was likely to rise further.

The new clashes broke out as vehicles loaded with fighters from Misrata, whose militia headquarters in the capital were at the centre of Friday’s fighting, headed to Tripoli from the eastern suburb of Tajura.

Prime Minister Ali Zeidan appealed for “restraint and a halt to the clashes”, warning the entry of more armed groups into the volatile capital could only “further complicate the situation.”

“The coming hours and days will be decisive for the history of Libya and the success of the revolution,” Zeidan stressed.

In the face of the turmoil two years after dictator Moamer Kadhafi’s overthrow in a NAT0-backed rebellion, US ambassador Deborah Jones tweeted: “Heartbreaking to hear continuing gunfire. An insult to the memory of the martyrs.”

On Friday, a demonstration calling for the Misrata militia, made up of former rebel fighters, to leave the capital turned into a deadly confrontation between rival gunmen.

The militias are holdovers from the 2011 uprising that ousted Kadhafi and are a powerful force in the increasingly lawless North African country.

After blasts and gunfire rocked several areas throughout Friday night, a relative calm had returned to Tripoli in the morning with only sporadic Kalashnikov fire in the Ghargour district where the violence flared.

The militia at the centre of the bloodshed also received reinforcements during the night from its home base in Misrata, 200 kilometres (120 miles) away, and recovered its headquarters in Ghargour.

Military police filtered access to the district on Saturday, warning motorists of the risks of gunfire.

The violence erupted when gunmen fired at hundreds of marchers carrying white flags from inside villas serving as their headquarters in the southern district of Gharghour.

That sparked violent retaliation as other militias assaulted the villas, set them partly on fire and expelled the Misrata fighters. It was unclear how many died in the demonstration and how many in the assault.

Zeidan said at first that armed demonstrators were involved in the clashes and the security forces had not intervened “so as not to complicate the situation”.

But he later backtracked to say the protest march had been “peaceful and came under fire when it entered Gharghour”.

Zeidan, who was abducted briefly by armed men in October, last week called on Libyans to rebel against militias. “The people must take to the streets … and support the building up of the army and police,” he said.

Sadat al-Badri, president of Tripoli city council which had called for Friday’s protest, insisted the demonstrators were unarmed. They were shot at from inside the militia headquarters, he said.

In sermons at midday Muslim prayers on Friday, imams backed the call to protest against militias.

The protesters, among them children, marched to the Misrata militia headquarters to press their demands when gunmen inside initially fired into the air to scare them off.

When the crowd continued to approach the building, the gunmen started firing at them, an AFP correspondent reported.

A leader of the militia from Misrata, Libya’s third city and scene of some of the fiercest fighting in the 2011 revolt, told private television Al-Naba that demonstrators had opened fire first.

The march was sparked by violence on November 7 in which the Misrata militia also played a central role and which terrorised Tripoli residents and illustrated again growing instability in Libya.

The rebels who overthrew Kadhafi were hailed as heroes for bringing an end to more than four decades of dictatorship but have since carved their own fiefdoms posing a constant threat to stability.

Residents of Tripoli frequently demonstrate against the militias, who have rejected government demands to turn in their weapons or join the national security forces.