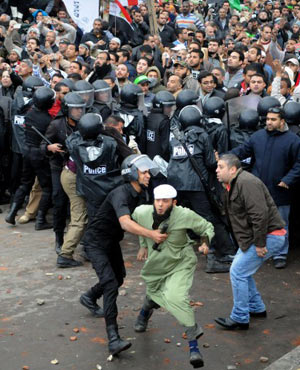 Two teenage boys were killed in Alexandria when supporters and opponents of deposed President Mohamed Morsi clashed on Friday, a day after the three-month-long state of emergency and curfew was lifted.

Sixteen-year-old Ihab Ahmed Selim was killed by gunfire during the clashes, and a 13-year-old, whose identity was not released, was hit by a public bus while fleeing from security forces.  Five more were injured in Alexandria, and four more were injured in Cairo, reported state-run Al-Ahram.

According to a statement by the Ministry of Interior, Selim, a student, was shot in the chest by Muslim Brotherhood supporters.  He died after being taken to a hospital.

Seven Brotherhood supporters were arrested in connection with Selim’s death, according to the statement.

Muslim Brotherhood leaders had called for a million-man march across the country under the banner of “No to Reprisal Justice” to protest Morsi’s continued detention, but Al-Ahram reported their numbers only amounted to several hundred people.

A group of Brotherhood students marched from Al-Azhar University toward Rabaa Al-Adaweya, the site of a massive pro-Morsi sit-in last summer, but were prevented from entering by security forces that had blocked the square off earlier in the day.

In a statement issued Thursday, the Anti-Coup Alliance, supported by the Muslim Brotherhood and other pro-Morsi groups, blamed the “deep state” for Morsi’s ouster, including the judiciary, saying that among “honourable judges” were other ones working against the revolution.

The alliance added that it considered Morsi’s trial as a “judicial farce” because it violated the constitution and did not seek justice for the Muslim Brotherhood members killed on the same night at the Presidential Palace.

A curfew was in place in 14 governorates across Egypt since the 14 August dispersal of sit-ins supporting deposed President Mohamed Morsi.  The month-long curfew was extended for two consecutive months by interim President Adly Mansour.  To extend the curfew any longer would have required a public referendum.

Egypt’s major streets, squares and gathering points will continue to have a heightened security presence even though the curfew expired, according to Minister of the Interior Mohamed Ibrahim.

There will also be additional security on 19 November, which is both the second anniversary of the deadly clashes on Mohammed Mahmoud Street and the date of the second leg of the World Cup qualifier between Ghana and Egypt, said Ibrahim.