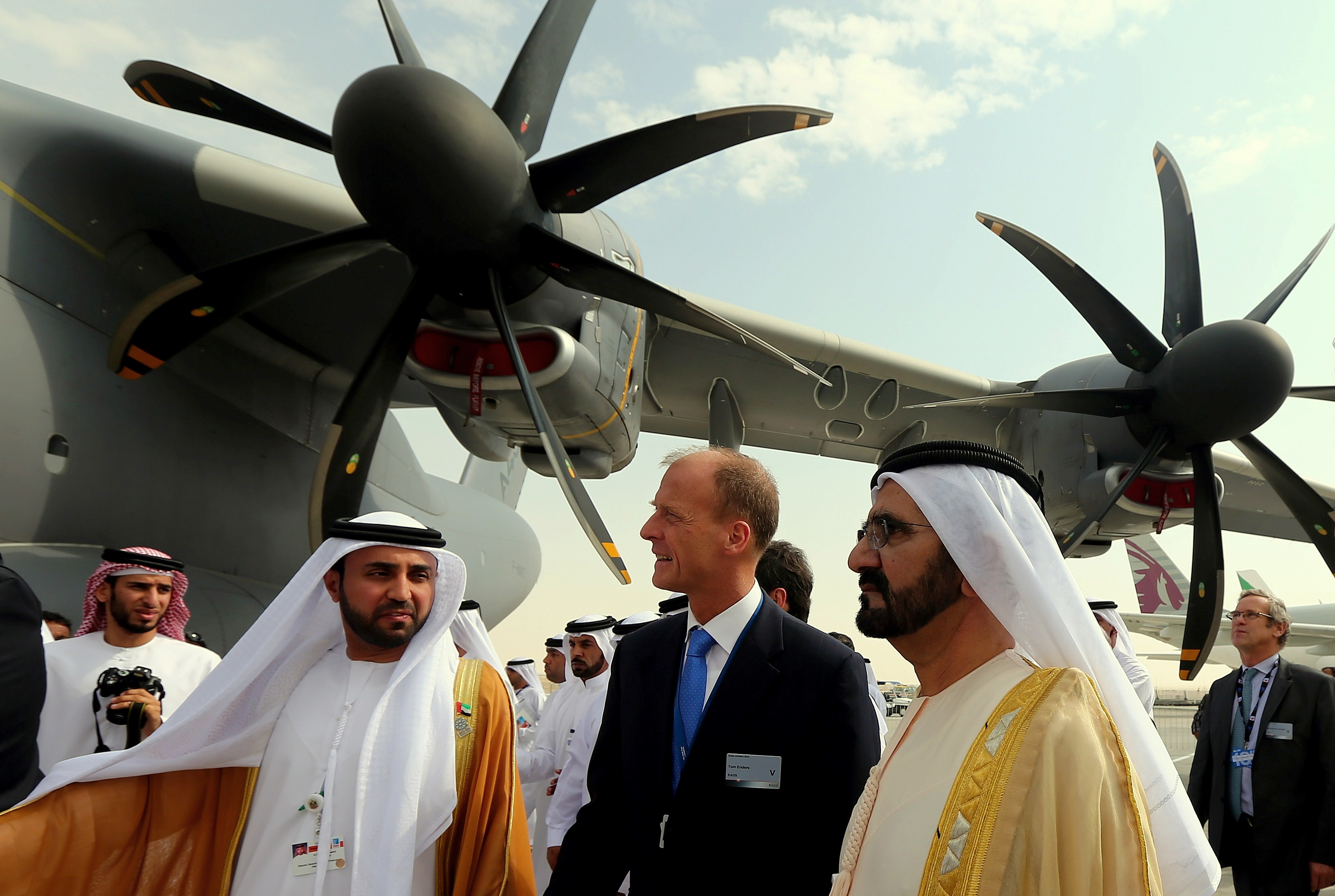 Reuters – Gulf airlines splashed out well over $100bn on new planes on day one of the Dubai Airshow, underscoring a shift in power in the aviation industry and giving a boost to the formal launch of Boeing’s newest jet, as well as to Airbus’s A380 superjumbo.

Dubai-based Emirates led the buying spree on Sunday with an order for 150 of Boeing’s new 777 mini-jumbo, in a deal worth $76bn at list prices. It also ordered 50 Airbus A380s, the world’s biggest passenger plane, worth $23bn.

With demand from other Gulf carriers including Etihad Airways and Qatar Airways, Boeing announced commitments for a total of 259 of the new 777 jet, previously codenamed 777X, worth about $100 billion at list prices – the largest combined order in its history and confirming earlier Reuters stories.

“The response to the 777X has been astounding,” Boeing Chairman James McNerney said at a packed news conference to officially launch the new plane, in front of Dubai ruler Sheikh Mohammed bin Rashid al-Maktoum.

Gulf airlines are competing with each other for a share of traffic flooding through the region, due to its strategic location between East and West, and with many recession-hit European airlines strapped for cash, their business is becoming increasingly important to Boeing and Airbus.

The revamped 777 marks a new front in the battle between the two aircraft manufacturers that dominate the civil aviation industry. Boeing’s new plane is aimed at heading off competition from the largest version of Airbus’s A350 in the mini-jumbo market that drives growth and connectivity between continents.

Boeing’s top plane making official pledged not to let a dispute with Seattle assembly workers over where the plane should be built interfere with its launch, which kicked off the Nov. 17-21 Dubai show.

The US group is looking for a home for the new jet after members of the International Association of Machinists rejected a proposed contract that would have seen Boeing commit to keeping the latest member of the 777 series near Seattle in exchange for restructured benefits.

With Boeing also agreeing deals for 30 of its 787 Dreamliners with Etihad and for over 100 of its 737 planes with budget carrier flydubai, the US manufacturer looked on course to defeat Airbus in the battle for orders at the Dubai show.

However, as well as the order from Emirates, Airbus announced a deal for 87 aircraft with Etihad which, including options for 30 more, could be worth $26.9 billion.

The European group also has a record of springing surprises, and is keen to prevent a smooth lift-off for the new 777.

“Airbus is desperate to blunt the impact of the 777X,” said a senior industry source, speaking on condition of anonymity.

Emirates’ A380 order was something of a coup for Airbus, which is under pressure to revive the fortunes of a plane which previously hadn’t found any buyers this year and faces a cut in output unless empty 2015 production slots can be filled.

Emirates is already the biggest customer of the A380 and its order for 50 more was at the top end of expectations, and brings its total orders for the plane to 140.

In a sign of the Gulf’s increasing power in the industry, Emirates Chairman Sheikh Ahmed bin Saeed Al Maktoum said he was confident of a shift in stance in the West that would allow the group to fly more of its planes to airports there.

“We are buying a product from their countries. So why would they not allow us to fly to these airports? If they don’t, they can take their planes back,” he said.

A group representing US airline pilots, meanwhile, warned that the sale of hundreds of planes to Gulf carriers that compete with US carriers would have “serious consequences for the U.S. economy and US airline workers.” This would create stiff competition for the U.S. airline industry.

Boeing’s new 777 comes in two models including what will be the world’s longest-distance passenger jet, a 350-seat model to be known as the 777-8 once the aircraft has been launched.

Together, the modernised planes call for development of carbon-fibre wings that fold at the tips to fit in the same parking spaces and new engines from General Electric.

Airbus says Boeing has packed in passengers densely to make the revamped aircraft’s economics work against its own all-new 350-seat model, the A350-1000, due to enter service in 2017.

It has launched a campaign for a minimum standard seat width of 18 inches on long trips, aiming to draw attention to what it says will be the 777’s narrower seats.

Some airlines have told Airbus that this is their decision and Boeing says many Airbus jets have similar seats.

Highlighting defence deals also at stake at the 17-21 November air show, UK Prime Minister David Cameron toured the complex even before the event had started, telling the heads of British aerospace and defence companies to “get out there and win”.

Britain is competing with France for a potential 60-plane fighter jet deal with the United Arab Emirates.