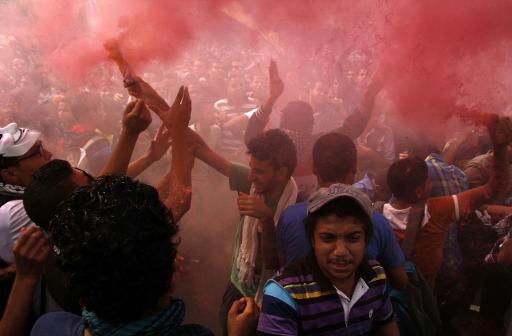 Students of the Zagazig University Faculty of Engineering have continued their strike for the second day on Sunday, having boycotted their midterm exams to protest the violations of the Ministry of Interior (MOI) that took place a week earlier.

The strike resumed after Central Security Forces (CSF) left the campus after using tear gas and yellow smoke bombs to disperse the students on their first day of their strike.

According to Mohamed Abdel Salam, researcher at the Association of Freedom of Thought and Expression (AFTE), student unions from other faculties at the university – including medicine, pharmacy, arts, sciences and education – have “shown their solidarity” with the engineering students. Their support for the strikes, Abdel Salam said, came in response to the arrest of students from the Faculties of Education and Sciences during the CSF raid on Saturday.

Zagazig University has seen continuous turmoil since last week, when a group of students from the Faculty of Physical Education attacked another group from the Faculty of Engineering. In the same week, AFTE Student Observatory reported that the administrative security attacked students belonging to the Muslim Brotherhood who were protesting against what they call the “3 July coup”.

According to a member of the Faculty of Engineering Student Union, the students are demanding the release of the students detained last week along with the detainees from Saturday. They also requested an official apology from the president of the university for the events of Saturday, repair of damage done by ‘thugs’ and the replacement of the administrative security with a civilian security company.

Last Wednesday six students were arrested from their homes, according to AFTE researcher Mohamed Nagy.

The Ahrar Movement launched is activity Sunday in Cairo University with the presence of hundreds of students who celebrated using flares.

In Ain Shams University a fight was reported by the AFTE Student Observatory among students belonging to the Muslim Brotherhood and students “in favour of the military.” An armoured personnel carrier based outside the university entered the campus and patrolled the campus to secure the area. The police personnel told the students that they had entered the university campus according to a handwritten request from the President of Ain Shams University Dr Hussien Eisa.

In Al-Azhar University, hundreds of students protested against the court verdict that sentenced 12 students to 17 years and a bail of EGP 64,000 each. The students marched to the headquarters of Al-Azhar and demanded the release of the detainees before their midterms.

In the Faculty of Commerce at Beni-Suef University, Students Against the Coup organised a human chain on Sunday that included dozens of university students. The human chain was protesting against what they called the “3 July coup” and “the oppression by the Ministry of Interior.”