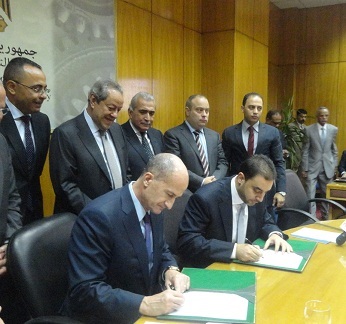 General Electric (GE) and Carbon Holding signed a $500m agreement on Monday to establish the largest petrochemical production facility in Egypt, according to an official statement from Ministry of Industry and Foreign Trade.

Under this agreement, General Electric will provide the technical and financial support to the Naptha Cracker project in El-Ain El-Sokhna, which is affiliated with Tahrir Petrochemicals Company.

The technical assistance lies in supplying the project with advanced gas engines, electricity generators and equipment for water purification in addition to other necessary services for the project.

The new project would produce 1,360,000 annual tonnes of ethylene and polyethylene. “The project will also contain a power plant producing 300 megawatts and water desalination unit working with the capacity of 3,000 cubic metres per hour,” El-Baz said.

El-Baz noted that the project would bring new technologies to the energy sector, as well as reinforcing the petrochemicals sector in Egypt.

The project will help spur growth, Abdel Nour said, highlighting its importance in supporting the construction and industrial sector in addition to creating new job opportunities.

Abdel Nour pointed out that this project is the largest industrial project of its kind in Egypt and is expected to achieve $6bn in annual returns.

GE’s advanced technologies will add value to the project, which will help in developing the infrastructure and exports sector in Egypt, Rice was quoted as saying in the statement.

GE, which employs 400 workers in Egypt, has been operating in the country for 40 years, Rice said, and the company is committed to strengthening its presence and partnerships in Egypt.

El-Baz noted that construction would begin in 2014 and was expected to take “approximately 50 months”, according to Reuters.

GE entered the Egyptian market in 1974 to provide technology solutions to Egypt’s infrastructure needs. It works with partners in the fields of energy, oil and gas, transportation, healthcare and other sectors.

Carbon Holding is an industrial developer that performs oil and gas projects in Egypt in addition to the Naptha Cracker project. It also has projects under construction for petroleum refining.