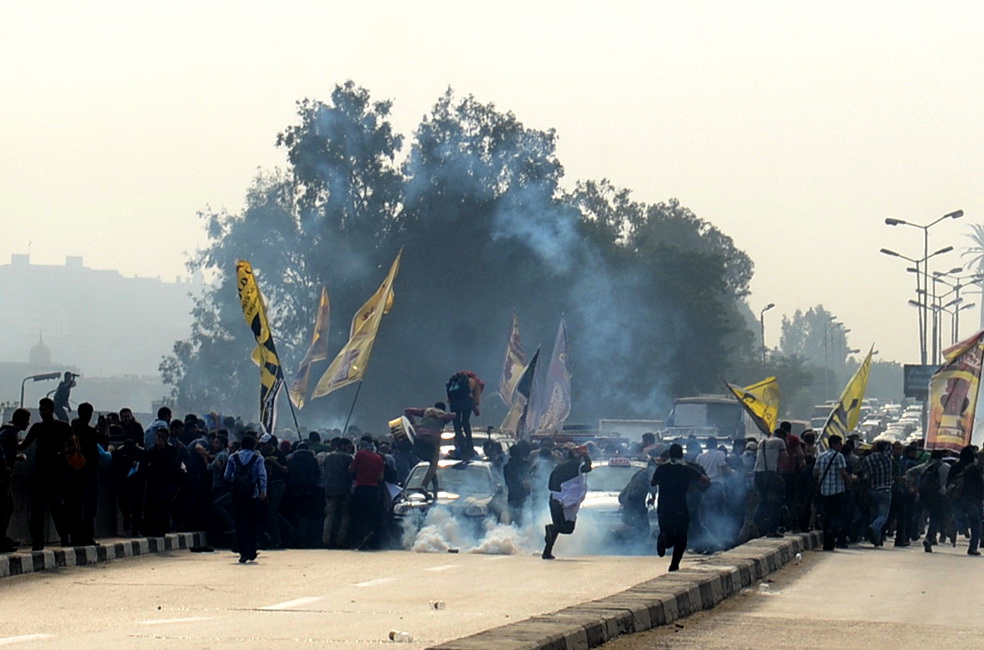 One student was killed amid clashes between Al-Azhar University students and security forces, which erupted in the university dorm on Wednesday night.

Student protests began on Wednesday morning outside Al-Azhar Institute condemning the arrests and death of Al-Azhar University students during the past four months.

The Ministry of Interior meanwhile accused the protesting students, whose numbers it estimated at 1,000, of attempting to break into Al-Azhar Institute. The ministry also accused the students of blocking the Salah Salem road, describing them as belonging to the Muslim Brotherhood. It announced the arrest of 24 “rioters”, adding that one of them is of Turkish nationality.

Students began protesting outside Al-Azhar University dorms on Wednesday evening, calling for the release of the students arrested earlier, Abdel Motaleb said. He added that they were soon attacked by security forces, whom he accused of using teargas, birdshot and rubber bullets inside the dorms.

“The dorm-rooms were packed with teargas,” Ali said.

Ayman Helmy, head of the Ministry of Interior’s media centre, said the police only used teargas to “disperse the students” who were blocking the dorms’ entrance.

“The police only intervened after the university’s administrative security asked for our help,” Helmy said. “They were unable to put down the fires the protesting students started.”

One Al-Azhar University student, Abdel Ghany Mahmoud, was killed amid the clashes. The student union said he was a medicine student.

Mohamed Fathallah, Ministry of Health spokesman, said the student’s cause of death was a birdshot wound. He added that no injuries were reported after Wednesday’s clashes.

“Police forces do not use birdshot weapons,” Helmy said. He added that 17 students were arrested from the clashes outside the dorm, describing those arrested as “rioters who were torching the dorms”.

University Chairman Al-Abd suspended all student activities on Wednesday night, MENA reported, tasking faculty deans with requesting police intervention in case of any “attacks on lives or institutions”. He also called upon the police to help implement his decision to ban protests “amid the unjustified, barbaric attacks Al-Azhar University has experienced.”

Abdel Motaleb claimed that Al-Abd isn’t authorised to ban on-campus protests. He added that student union activities were already at a standstill.

“No activities can take place without the ratification of the students’ groups bylaws,” Abdel Motaleb said. “The university’s deputy chairman is yet to ratify the bylaws I submitted.”

Helmy said the police would not intervene in Thursday’s student protest as long as the protesters remain peaceful.

The Nasr City Misdemeanour Court sentenced on Thursday 40 people to one and a half years in prison for rallying and attacking security personnel, reported state-run Al-Ahram.

The aforementioned were arrested following clashes around Al-Nasr road in October, after a protest staged by Al-Azhar University students marched outside campus and blocked Al-Nasr road.

Student protests have taken over Al-Azhar University since the start of the academic year in October. Last Thursday, 12 students were sentenced to 17 years in prison and an EGP 64,000 bail each for breaking into Al-Azhar Institution on 30 October.