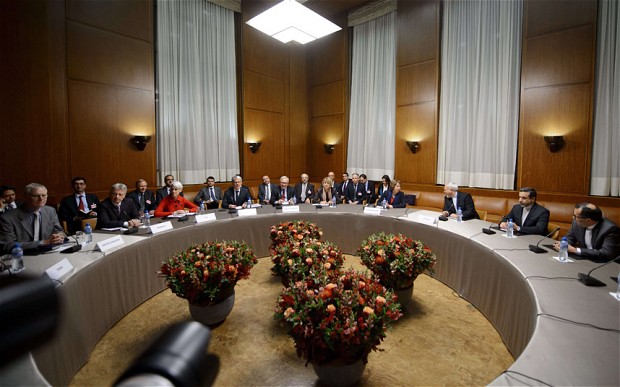 Iran denies allegations by Western powers and their allies that it is seeking the capability to produce atomic weapons and insists its nuclear ambitions are limited to the peaceful generation of electricity.

Following are questions and answers about the proposal based on comments from government officials, diplomats and nuclear experts. All details are preliminary and subject to change, diplomats say.

WHAT IS THE BACKGROUND?

Iran has been hit with U.S., European Union and U.N. Security Council sanctions for refusing to comply with U.N. resolutions that it halt uranium enrichment and other sensitive nuclear activities that could be used to make weapons.

Iranian oil exports have fallen by about 60 percent in the past two years as the EU stopped purchases and most Asian buyers drastically cut imports because of the sanctions. Iran is now earning only about $100 million a day from oil sales as opposed to $250 million two years ago.

In addition to the loss of oil income, inflation in Iran has risen sharply and the value of its rial currency has sunk.

Iranian President Hassan Rouhani was elected in June on a platform of conciliation, saying he wanted to ease Iran’s international isolation and end the sanctions. He has also sought to improve relations with Washington.

WHAT ARE THE NEGOTIATIONS?

Britain, China, France, Germany, Russia and the United States have met with the Iranians three times since September, when foreign ministers from the six powers and Iran announced a renewal of negotiations. They are being coordinated by EU foreign policy chief Catherine Ashton.

Two rounds of negotiations in Geneva in October and November failed to produce a deal, although diplomats involved said they were close to securing an interim agreement at the round of talks on Nov. 7-9.

The goal of the talks in Geneva from Wednesday to Friday is to finalise an interim deal to allow time for the powers to negotiate a permanent agreement with Iran that would end a decade-long standoff and provide assurances to the six powers that Iran’s atomic program will not ultimately produce bombs.

WHAT IS IRAN BEING ASKED TO DO?

The latest inspection report on Iran by the International Atomic Energy Agency said Tehran had slowed the expansion of its enrichment programme to a virtual halt. Western powers want Iran to go further. In the initial phase of the deal, which U.S. and European delegations say would last around half a year, Iran would be asked to do the following:

– Stop producing uranium enriched to a fissile concentration of 20 percent, a relatively short technical step away from weapons-grade material

– Possibly ship some refined uranium out of the country

– Commit to permitting farther-reaching U.N. inspections. The IAEA would play a central role in monitoring the implementation of any deal ;

– Not allow the Arak research reactor to go into operation. At the most recent meeting in Geneva, Francedemanded that construction of the reactor, which will be capable of producing weapons-grade plutonium if it goes on line, be halted. Washington has also expressed concerns about Arak, saying they must be addressed. Western diplomats say there is agreement among all six powers about what is expected from Iran in the case of Arak, although they declined to say precisely what their demands were regarding the reactor under construction.

A diplomat close to the IAEA said recently that Iran had virtually frozen construction of Arak.

HOW MUCH WOULD SUCH A DEAL SLOW DOWN IRAN’S PROGRAMME?

U.S. President Barack Obama said on Thursday the proposed interim deal would buy additional months in terms of Iran’s capacity to break out of the nuclear Non-Proliferation Treaty regime and produce weapons, if it chose to do so.

But Olli Heinonen, a nuclear expert at Harvard University and former chief inspector at the IAEA, questioned Obama’s suggestion that the timeline for Iran’s ability to produce a nuclear bomb would be pushed back months. With many centrifuges spinning in Iran, a weapons capability would inevitably remain.

WHAT ARE SOME OF THE STICKING POINTS?

Diplomats say that major sticking points are what to do with the Arak reactor – Iran does not want to give it up – and Tehran’s insistence that the six powers explicitly recognise its right to enrich uranium. The United Statessays no state has an inherent right to have enrichment capabilities.

Iranian Foreign Minister Mohammad Javad Zarif hinted at a possible way to bridge this issue over the weekend – Iran could insist on its own right to enrich uranium without requiring others to explicitly recognize it. But a senior Iranian negotiator said on Thursday that Iran would insist on the right to enrich being included in the interim deal.

WHAT IS IRAN BEING OFFERED AS INCENTIVES?

There has been much contradictory information presented to the public about the offer being floated to Iran. Based on information provided to Reuters by diplomats and government officials, two of the most important points are the following:

– The gradual disbursement in installments of Iranian funds frozen in overseas bank accounts. The maximum amount available for disbursement is around $50 billion. Kerry said in a television interview on Thursday that he had offered a “tiny portion” of Iran’s frozen funds as a possible initial payment

– Temporary relaxation of restrictions on Iranian trade in precious metals, suspension of pressure by Washington on countries not to buy Iranian oil, the possibility to sell petrochemicals and possible steps by Western powers to enable legitimate Iranian trade

Further possible details emerged last week. One source briefed on the discussions told Reuters that Iran was being offered a chance to sell about $3.5 billion of oil over six months as well as $2 billion to $3 billion of petrochemicals and $1 billion to $2 billion of gold.

At current prices, that would permit Tehran to sell about an additional 200,000 barrels of oil a day, a 20 percent increase in exports. The source said such an arrangement would also let Tehran import some $7.5 billion of food and medicine, plus $5 billion of other goods currently barred.

Israeli Strategic Affairs and Intelligence Minister Yuval Steinitz said last week the relief package offered could lower the annual cost of sanctions to Iran by anywhere from $20 billion to $40 billion – out of a total annual cost of $100 billion.

Israeli Prime Minister Benjamin Netanyahu has been lobbying against any agreement at the Geneva talks that would fail to strip Iran of nuclear enrichment capabilities and has urged no let-up in economic sanctions.

A U.S. media report last week cited a former Obama administration official as saying that in the first phase of a deal, Iran would receive less than $10 billion in sanctions relief.