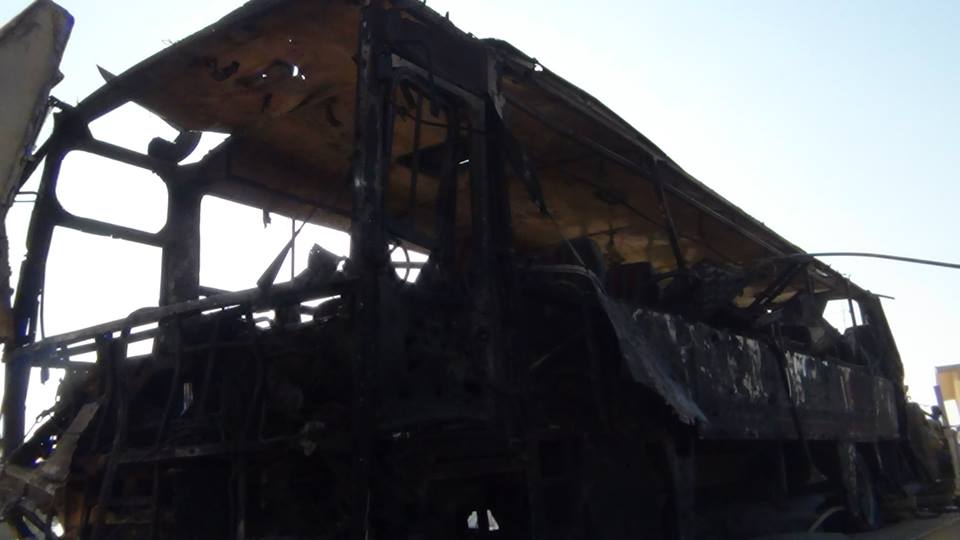 Condolences are due not only for the families of the dead and the armed forces, but for the whole of Egypt, Defence Minister Abdel Fatah Al-Sisi said in a speech on Wednesday night.

The speech came after a military funeral was held for 11 soldiers killed when a suicide car bomb exploded. The bomb targeted a bus carrying the soldiers on a road connecting Rafah and Al-Arish, North Sinai.

Al-Sisi repeated during the speech that the “fall of these martyrs, will only increase our determination.” He added that they fell in the “confrontation of terrorism.”

“We will continue to fight those who fight us and raise their weapons at the army, the police and the state,” he said. He added that everyone must know that “we are ready to die for the sake of Egypt.”

Standing to Al-Sisi’s left as he delivered the speech was Interior Minister Mohamed Ibrahim.

The explosion also left 37 injured, seven of which are in critical condition.

The attack sparked widespread condemnations from inside Egypt as well as from abroad.

In a meeting between Al-Sisi and British National Security Advisor Sir Kim Darroch on Thursday, the latter expressed the British government’s condolences and said Britain “utterly condemns terrorism in all its forms.”

Palestinian movement Fatah’s Office of Information and Culture also condemned the attack in a statement.

The ouster of former president Mohamed Morsi was followed by a surge in militancy in Sinai. The peninsula has witnessed recurring attacks targeting security checkpoints and personnel.

At least two policemen have been killed in Sinai over the past week. On Saturday, 40-year old policeman Mohamed Zayed was killed by unknown gunmen who shot him in the head and foot. On Thursday, another police officer Abdel Moneim Ahmed was killed in front of his family when three militants broke into his residence and opened fire on him.

In just one week in October, the death toll of security personnel reached seven.

Both the armed forces and the Ministry of Interior had previously announced intensified efforts to secure the volatile peninsula.