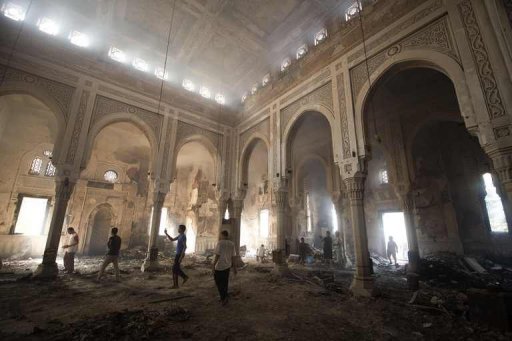 The Anti-Coup Alliance has called for a million-man-march on Sunday under the banner “We Are All Rabaa” in commemoration of 100 days since the dispersal of sit-ins supporting former president Mohamed Morsi at Rabaa Al-Adaweya and Nahda squares.

The alliance said in a statement issued on Thursday evening that next week’s protests, which will begin on Friday, will be held under the banner “The Massacre of the Century”, in reference to the 14 August sit-in dispersals which killed hundreds.

The group went onto accuse “the coup authorities” or perpetrating  “a new massacre inside the Al-Azhar University campus, thinking they can silence the voice of the revolution before passing the [disgraceful new] constitution” which, according to Constituent Assembly leaders, is nearing completion.

The alliance also announced that they would “demonstrate in all squares and in front of all Egyptian embassies around the world, raising the photos of the martyrs and the symbol of Rabaa.”

Mohamed Ali Bishr, former local development minister and a leading figure within the alliance, said in an interview with the Freedom and Justice Party newspaper that the group adheres to “full constitutional legitimacy”, which it says includes the return of ousted president Mohamed Morsi, parliament, the Shura Council and the 2012 constitution. Bishr also said the alliance “does not object” to holding a referendum on both Morsi’s and the post-30 June roadmaps “if [Morsi] sees this as a solution to end the current crisis.”

Before his ouster, Morsi had offered a roadmap that included amending the 2012 constitution.

Bishr implied during the interview that negotiations about Morsi’s status are “possible”.

“Talks about a procedure to grant the demands of those who protested on 30 June are possible,” he said. “Perhaps this would come through the president stepping down or mandating his powers, but through the context of the constitution and by Morsi’s free will.”