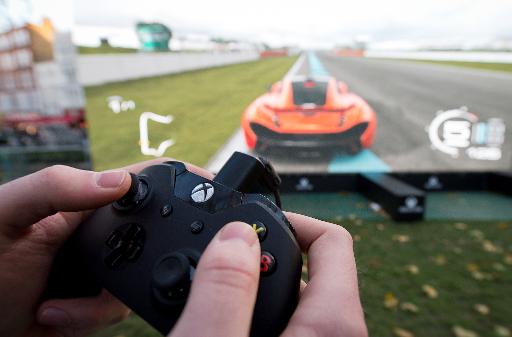 AFP – Gamers in more than a dozen countries started snapping up new-generation Xbox One consoles Friday as Microsoft battled Sony to be at the heart of Internet age home entertainment.

Keenly-awaited Xbox One consoles launched in more than a dozen countries including Australia, France, Britain, Brazil and the United States as day dawned in respective time zones.

Xbox fans queued at consumer electronics shops to be among the first to get their hands on Microsoft’s beefed up system that extends beyond gaming to online films, music, social networking and more.

A man in New Zealand, 24-year-old Dan Livingstone, became the first person in the world to officially own an Xbox One. He said he was immediately retreating for five days to play with it.

Australia was next in the global roll out. The distinctive Sydney Tower turned Xbox One green and another 3D projection beamed onto the water beneath the Sydney Harbour Bridge to mark the midnight launch.

In California, people were also eager to get one of their own.

“It’s a big upgrade; a big change,” said 23-year-old Jonathan Guerrero, who staked out a spot at the front of the line at a Best Buy electronics shop in Northern California 13 hours before the consoles went on sale a minute into Friday.

“You are jumping from okay to super great.”

Hassan Ali, 34, said he queued to get an Xbox One because he has an ideal television for the rich graphics pumped out by the console. He described his set as a 3-D, high-definition, smart television with a 65-inch screen.

“It’s kind of amazing that you can look at the game and it looks like real life,” said 34-year-old Ali, who told of loving video games since his first Sega device in 1985.

Sony last week unleashed its new champion in the long-running console war, getting a slight jump on Microsoft heading into the prime holiday shopping season.

Sony said it sold more than a million PS4 consoles in the 24 hours after its release on November 15.

Analysts said that it remained to be seen which of the new-generation consoles will prove more popular, noting that the lower price plays in favor of the PS4.

“If history has anything to say about it, core gamers tend to favor Sony,” said Brian Blau, research director at analyst firm Gartner.

“There is nothing I’ve seen to say that one platform is going to have an advantage over the other.”

Both consoles boast upgrades which provide richer graphics and more immersive game play than their predecessors. Social features of online play have also been enhanced, along with the ability to share with friends.

Microsoft touts the Xbox One console as a home entertainment hub that goes far beyond games.

Microsoft has put its hardware and software mastery to effective use, bringing game controllers, tablets, smartphones, voice, and gesture together in the Xbox One.

In a move that might irk gamers, neither Xbox One or PS4 are compatible with titles designed for play on earlier versions of consoles.

Mehdi was not worried about the booming popularity of play on smartphones and tablet computers, saying it has increased the appetite for interactive entertainment in what has grown to a $93 billion industry, including sales of software and hardware for consoles, PCs and handheld devices.

Gartner forecast that the console segment of the video game market will grow from $44 billion this year to $49 billion, while that of mobile games will climb from about $13 billion to $17 billion.

“The key for them is getting developers to build compelling games and applications that take advantage of all the wonderful resources that come in those boxes.”

Microsoft and Sony both worked hard with blockbuster game makers to have titles ready to hit the market with the new consoles.

While much is made of rivalry between Microsoft and Sony the evolution of consoles into digital home entertainment systems means competition from devices such as Roku boxes or even Google’s inexpensive Chromecast gadget for easily streaming Internet content to television screens.

The stakes in the console game are heightened for Microsoft because Xbox has been a hit while the US-based technology colossus has seen other forays into consumer electronics flop.