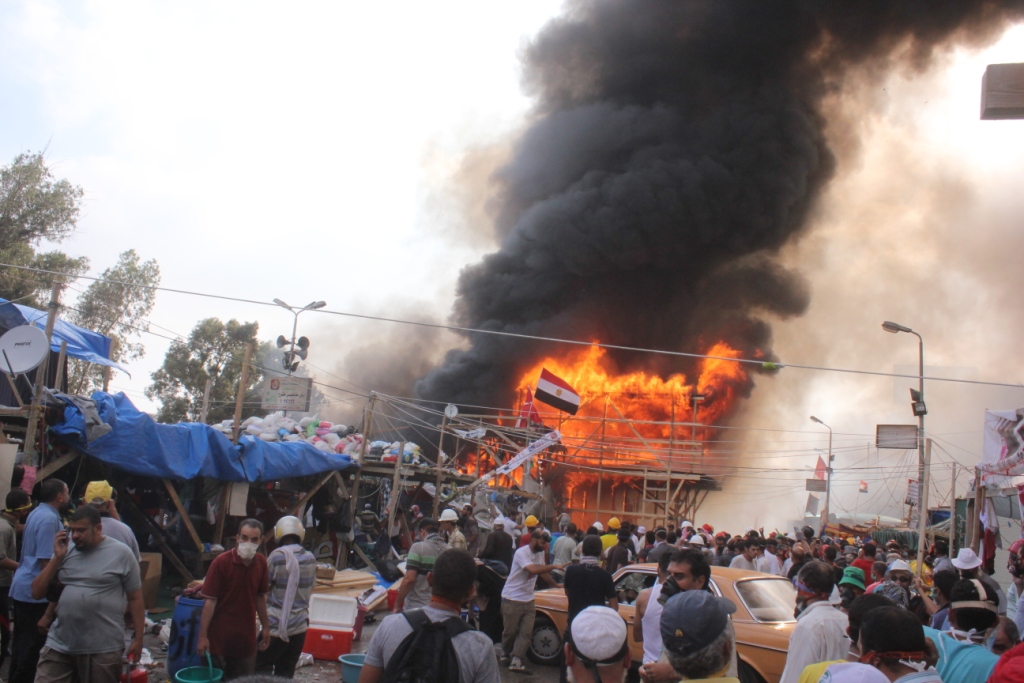 Protests were held outside Cairo University on Sunday in response to calls by the Anti-Coup Alliance to mark the passing of 100 days since the dispersal of the Rabaa-Al Adaweya and Al-Nahda sit-ins.

The Anti-Coup Alliance, also known as the National Coalition to Support Legitimacy, announced that this most recent call for protests is under the banner of “We Are All Rabaa”. The alliance’s call was extended to “Egypt and around the world.”

Mostafa Al-Khatib, media coordinator of the Muslim Brotherhood’s Freedom and Justice Party, said in addition to the gathering at Cairo University there are plans to hold marches to Rabaa Al-Adaweya Square, which holds great value to supporters of former President Mohamed Morsi as it hosted their sit-in for weeks. Morsi’s supporters also occupied Al-Nahda Square in Giza for weeks. Both sit-ins were violently dispersed on the same day.

The Anti-Coup Alliance has been organising protests every week, since Morsi’s ouster on 3 July. Al-Khatib said the thing that upsets “putschists” the most “is being present on the streets.” He said the alliance is organising protests in conjunction with other forms of protest like electronic campaigns.

On 14 August, the forcible dispersals of pro-Morsi sit-ins in Rabaa and Al-Nahda squares left hundreds dead. Wiki Thawra, a website dedicated to documenting the Egyptian revolution, put the latest death toll of the Rabaa sit-in dispersal at 969 and that of Al-Nahda dispersal at 96. Official figures are lower. The Forensics Authority announced 627 deaths in the Rabaa dispersal and 21 in Al-Nahda.

Volunteer guards at the Rabaa sit-in had been on alert days ahead of the dispersals, expecting the police to take action.

On 24 July, Defence Minister Abdel Fatah Al-Sisi called on Egyptians to take to the streets on Friday to authorise the army to “confront violence and terrorism.” But Morsi supporters rallied afterwards, challenging Al-Sisi’s calls.

On 16 November, the alliance, which Al-Khatib said includes around 30 parties and unions, suggested an exit strategy. It called on for “deep dialogue” with revolutionary forces, parties and national figures on how to get out of the current crisis and “end the military rule” and “agreeing on future arrangements needed to create a modern democratic nation after breaking the coup.”

Al-Khatib said a liaison committee has been formed to communicate with parties and movements about the call for dialogue.