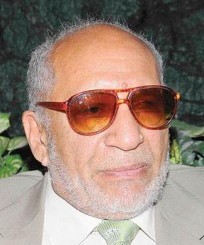 Former Judge Mahmoud Al-Khodeiry was referred to criminal court on Wednesday for torturing a lawyer in a tourism company headquarters in Tahrir Square on 3 February 2011.

A press release issued by the prosecutor general’s office said that the eight are accused of detaining, torturing, electrocuting and indecently assaulting a lawyer in Safir Tourism Company headquarters.

The prosecution has alleged that the accused believed the lawyer to be a state security officer and tortured him for three days.

According to a statement by the prosecution, they have reviewed a video documenting the torture incident, which they said showed a location similar to the tourism company headquarters, adding that all eight defendants appear in the video.

Seven of the eight referred are currently detained, the latest being Al-Khodeiry, who was arrested in the Alexandria district of Sidi Gaber on Monday night.

The eighth, Al-Jazeera anchor Ahmed Mansour, is still free, with prosecution saying it will send a request to the state of Qatar to hand him over to Egyptian authorities. Mansour openly supports the Brotherhood.