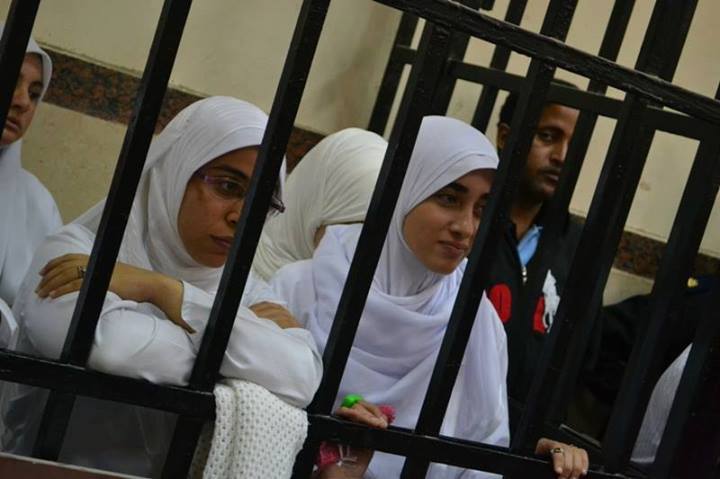 The 21 girls sentenced to prison after protesting against the military ouster of former President Mohamed Morsi are “prisoners of conscience” whose detention reflects “Egyptian authorities’ determination to punish dissent,” according to Amnesty International.

Fourteen girls were sentenced to 11 years and one month in jail on charges of acts of violence, encroachment on public and private property, and possession of melee weapons. The remaining seven were minors and were sentenced to juvenile detention until coming of age to serve in a penitentiary with adults.

The international human rights organisation condemned the verdicts the 21 girls received in a statement released on Thursday. It cited the testimony of a 19 year-old girl who was protesting alongside the sentenced girls on 31 October yet escaped arrest. The girl told Amnesty International she was, together with the others, beaten with gun butts all over her body. She added that security forces slapped her on the face and dragged her on the ground until her arm was broken.

“Instead of imprisoning peaceful protesters, authorities should be ensuring prompt, independent and impartial investigations into police abuse of protesters, reining in security forces, and upholding the right to freedom of peaceful assembly,” said Hassiba Hadj Sahraoui, Deputy Director for the Middle East and North Africa at Amnesty International. Sahraoui added that the 21 girls “should have never been arrested” and called for their immediate and unconditional release.

The girls’ imprisonment was also condemned by a group of 14 domestic human rights organisations in a joint statement released on Thursday. The organisations described the verdict as an “alarm bell” for Egyptians regarding the repercussions of “constantly subjecting the judiciary to pressure by the authorities.”

“We are in great need of stopping the use of the judiciary as a political tool and a weapon against political rivals,” the statement read.

The signatory organisations said that since Morsi’s ouster on 3 July, the authorities have been resorting to tools that contradict justice and the rule of law. They accused the ruling authorities of violating citizens’ rights and freedoms and cementing the “police state” which reined Egypt before the 25 January Revolution.

“These harsh prison sentences against young women and girls … are a strong signal that there will be no limit to the authorities’ efforts to crush opposition and that no one is immune to their iron fist,” said Amnesty’s Sahraoui.

The domestic organisations warned that such a security crackdown would only reinforce political and economic instability, absence of security and the deterioration of most citizens’ living conditions.

The signatory organisations included; the Egyptian Initiative for Personal Rights, the Egyptian Centre for Economic and Social Rights, the Arab Network for Human Rights Information, the Association for Freedom of Thought and Expression, and the Hisham Mubarak Law Centre.

Women’s rights group Fouada Watch warned that the verdict would turn the minor females to “criminals” and “destroy their future”. The group described the verdict as a “grave violation of people’s right to hold peaceful protests.”

The 14 girls were served six years in prison for vandalism, four years for rioting and “thuggery”, one year for possession of melee weapons and one month for assembly, according to Mahmoud Gaber, a member of their defence team. Gaber claimed that according to the prosecution’s report, the form of sabotage the girls are accused of is “scratching a glass door” and that the weapons they are accused of possessing are “rocks”.

Gaber added that the seven minor girls would remain in a juvenile correctional facility until they turn 18; then, the judge can order their release or imprisonment. The minors are aged between 15 and 17 years old, according to Gaber.

The lawyer said that the defence team is appealing the court verdict.

The girls were arrested on 31 October during a demonstration and the Alexandria prosecution renewed their detention for 15 days on 12 November.

The girls are part of a group called 7 am, which holds protests in the early morning before school starts. The girls were protesting at Syria Street in the Roshdi area of Alexandria before local police arrested them.