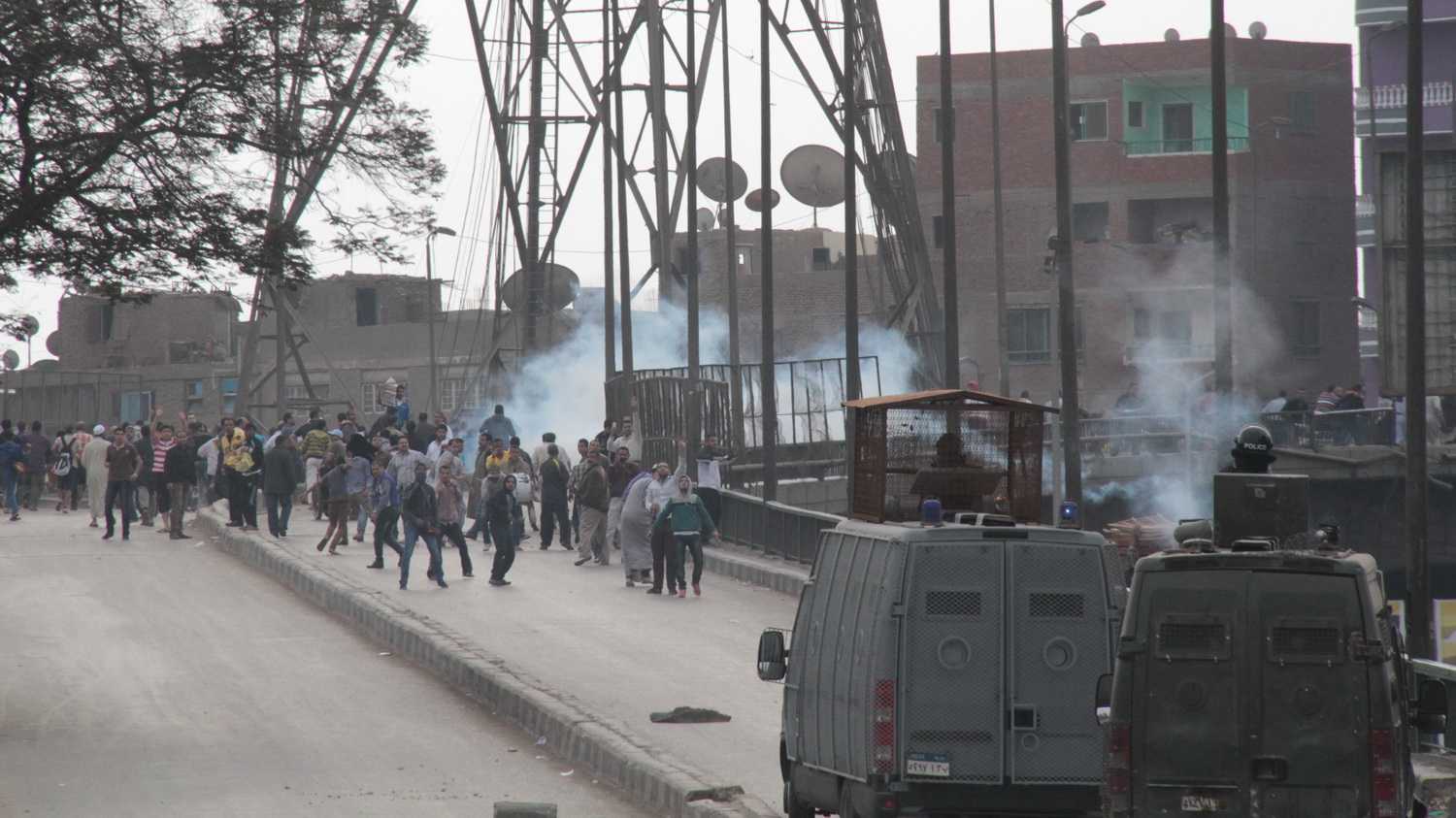 By Haitham El-Tabei (AFP) – Police fired tear gas on Friday at Islamists who demonstrated in Egypt, defying a new law banning unauthorised protests that has also angered activists following the arrest of a prominent blogger.

The Muslim Brotherhood had vowed to go ahead regardless with the weekly protests it has organised after noon prayers ever since Islamist president Mohamed Morsi was overthrown in a July 3 military coup.

Late on Thursday the interior ministry warned against unauthorised protests, after police detained prominent blogger Alaa Abdel Fattah, in a stark declaration of intent reminiscent of the autocratic rule of veteran strongman Hosni Mubarak, ousted in a popular uprising nearly three years ago.

Police used tear gas against hundreds of Morsi’s supporters who protested in front of a presidential palace in Cairo, an AFP reporter said, adding that he also heard gunshots.

Tear gas was also fired on dozens of Islamists in Cairo’s Mohandessin district and on a key road leading to the pyramids.

Protesters retaliated by throwing stones and burning tyres in Mohandessin, officials said, adding that similar protests were also dispersed in the cities of Alexandria, Suez, Mahallah and Qena.

Egypt’s army-installed government say the new law requires protest organisers to give three days’ written notice to the authorities before holding any demonstration.

In addition, it also bans demonstrations in places of worship or starting from such places.

The interior ministry on Thursday warned against “demonstrations that break the law without obtaining prior permission from security forces” and said “it will deal with these illegal activities firmly and decisively.”

On Thursday, an engineering student was killed during an Islamist demonstration at Cairo university, health officials said.

To the anger of secular supporters of Morsi’s overthrow, police have taken action against all demonstrations, not just those organised by the ousted president’s Islamist backers.

Activists say the ban is hypocritical as the army justified its “coup” as a response to mass demonstrations across the country against Morsi’s turbulent single year in power.

Pro-democracy groups have been particularly incensed by the arrest of Abdel Fatah, a prominent Morsi opponent.

He was detained at his home in a western district of Cairo, said his wife, Manal Hassan, who tweeted that she had been “beaten” during his arrest.

Prosecutors had issued warrants on Wednesday for the arrest of Abdel Fatah and fellow activist Ahmed Maher, for taking part in an unauthorised demonstration the previous day.

“Deja vu, I’m about to hand myself in to the authorities again on Saturday,” Abdel Fattah wrote on Facebook in response to the arrest warrant.

Abdel Fattah was detained under Mubarak, under the military junta that ousted him, and again under Morsi.

On Friday, Maher tweeted: “our dream was to live with dignity but the army, Mubarak’s corrupt regime and their allies … are fighting it with the arrests and crackdowns”.

Human rights groups too have lashed out at arrests of protesters opposing the disputed law.

“In the past few days, FIDH has documented several cases of arrests, detention and beating of protesters as well as cases of sexual harassment towards both men and women,” said International Federation for Human Rights in a statement on Friday.

Analysts say the mounting disillusion of veteran activists such as Abdel Fattah and Maher may strain the unlikely coalition of security hawks and liberal democrats installed by the military after Morsi’s ouster.

They say it could provoke the very unrest it was supposed to quell.

“Rather than consolidate the transition, it weakens it. It alienates even supporters of the government,? said Issandr El Amrani, North Africa project director for the International Crisis Group.

“For the past three years, police brutality has been the cause of much of the political turmoil. You keep going through a cycle.”

The new protest law severely curtails the right to free assembly asserted by the millions of protesters who took to the streets to overthrow Mubarak in the Arab Spring.

The law also stipulates that security forces must give participants in unauthorised demonstrations verbal warning to disperse before resorting to water cannon, tear gas and as a last resort, birdshot, to make them do so.