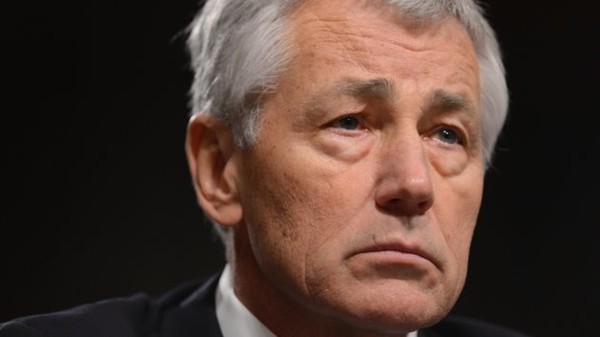 United States Secretary of Defence Chuck Hagel voiced his government’s concern over the Egyptian government’s restriction of demonstrations and protests on Saturday.

During a phone call with his Egyptian counterpart, Minister of Defence and Commander-in-Chief of the Armed Forces Abdel Fattah Al-Sisi, Hagel also raised the issue of the continued arrest of Egyptian activists and the arrest of a group of girls, who were sentenced last week in Alexandria.

Hagel expressed condolences for soldiers who had been killed in Sinai, and thanked Al-Sisi for Egypt’s continued efforts “in combating terrorism in Sinai,” according to a readout issued by the US Department of Defence.

“Secretary Hagel noted that the Egyptian government’s response to free expression will demonstrate the interim’s government’s commitment to a non-violent, inclusive and sustainable democratic transition,” said the department in its Saturday statement.

The two also discussed the status of the constitution, which was scheduled to be finalised by the Committee of 50 on Sunday, along with counterterrorism efforts, border and maritime security, and regional security issues that included Syria and Iran.

“The reported use of force, arrests, and disproportionate sentences can only impede the country’s transition to democracy,” said a statement issued from Ashton’s office. “Moreover, such measures violate the rights and aspirations of the Egyptian people, including under the new law on demonstrations, and will never deliver real sustainable security for the Egyptian population.”

Ashton met with Deputy Prime Minister Ziad Bahaa El-Din last week and told him that “fundamental human rights have to be respected at all times,” adding that such rights were especially important “when Egypt is in the finalising stages of drafting the revised constitution which should safeguard the rights and obligations of all Egyptians.”

The US State Department had previously criticised the controversial protest law, urging the interim government to “respect individual rights.”

“While demonstrators have the responsibility to express their views peacefully, the government has a responsibility to protect the fundamental freedoms of the Egyptian people,” read a statement from the State Department.

The French Ministry of Foreign Affairs also criticised some of Egypt’s recent developments on Friday and called on Egyptian authorities “to abide by their commitments to civil liberties, particularly the freedom to demonstrate peacefully in the manner that respects public safety, in accordance with the roadmap and Egypt’s international commitments in this area.”

The French government also reiterated its “full support” for Egypt’s transition and the establishment of democratic institutions “in accordance with the announced timetable.”