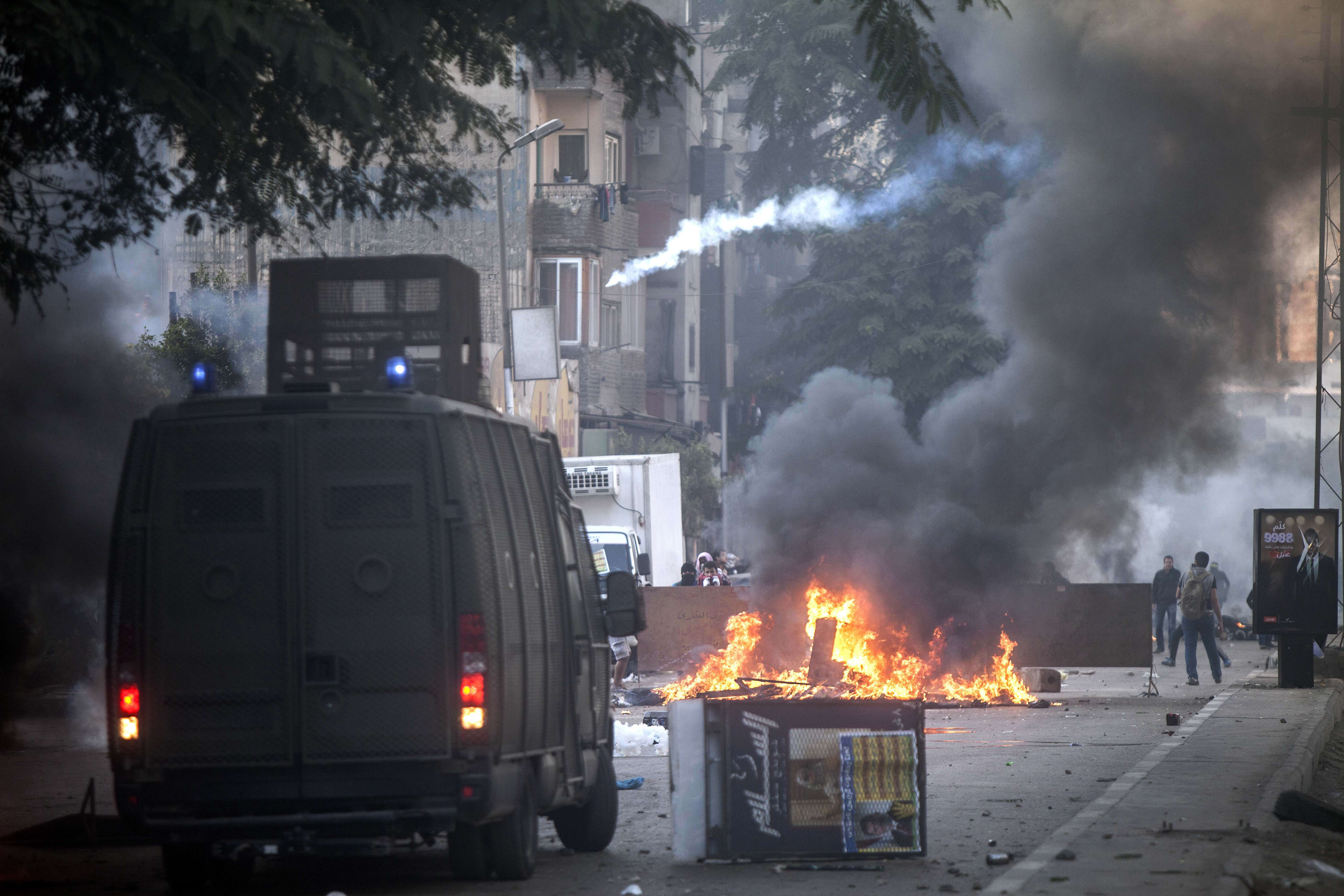 Two photojournalists were arrested by the military police from Cairo on Friday while covering a Muslim Brotherhood protest in Helmeyet Al-Zaitoun District.

Colonel Ahmed Ali, military spokesman, said that at the time of their arrest, the photojournalists were inside the Officers Club, which is a military institution. Ali added that the club was torched and sabotaged by a Muslim Brotherhood supporters’ march.

“It’s not our job, while arresting people, to discern what each individual was doing at the scene,” Ali said, confirming that the photojournalists were arrested by the military police. “The prosecution can figure out who was there to do their job and who wasn’t.”

The Ministry of Interior announced in a statement released on Friday that clashes broke out between citizens residing around Helmeya Square and Gesr Suez Street in Heliopolis and Muslim Brotherhood supporters. It arrested 19 protesters, who allegedly attacked security personnel with Molotov cocktails.

A journalist at Al-Badil who preferred to remain anonymous was with Abdel Moneim at the time of his arrest. He denied that Abdel Moneim was taking photos of any military institutions or Army Personnel Carriers (APCs); he was only shooting the clashes between the Brotherhood supporters and the security forces outside the Officers’ Club.

The journalist said that a military officer spotted Abdel Moneim while he was taking photos; he dragged him inside the Officers’ Club and assaulted him. He claimed military personnel attacked Abdel Moneim with batons, destroying his camera equipment.

The anonymous journalist said that the protesters were attacking the Officers’ Club from outside.

The Arab Network for Human Rights Information (ANHRI) said two of its lawyers were attending the investigation session of the two photojournalists at the C28 military prosecution in Nasr City. They reportedly face the charge of purposefully vandalising the Helmeya Park, which falls under the auspices of the armed forces. The investigations were still ongoing at the time of publishing.

Sarah Al-Sherif, member of the No Military Trials for Civilians movement, however, said that a total of four people were arrested from Friday’s protest outside the Officers’ Club. She could only name Abdel Moneim and Hendawy.

Ali said those arrested will be facing military prosecution, since they “were arrested inside a military institution while it was being attacked”.

Article 19 of the constitutional declaration issued by interim President Adly Mansour in July gives the military judiciary the jurisdiction to rule on all crimes related to the armed forces, its officers, and personnel. The declaration governs the state until a new constitution is issued.

Article 204 of the draft constitution bans military trials for civilians “except in cases which represent a direct assault on armed forces institutions, their camps or anything that falls under their authority, alongside assaults on military or border zones, and military institutions, vehicles, weapons, ammunition, documents, secrets, public funds, or factories.” The article also allows for the military prosecution of civilians who commit crimes concerning conscription or those considered to be a “direct attack on military officers or personnel as a result of carrying out their duties,” leaving the definition of such crimes up to the law.

The No Military Trials movement is campaigning against the draft constitution due to the group’s rejection of the above-mentioned article.