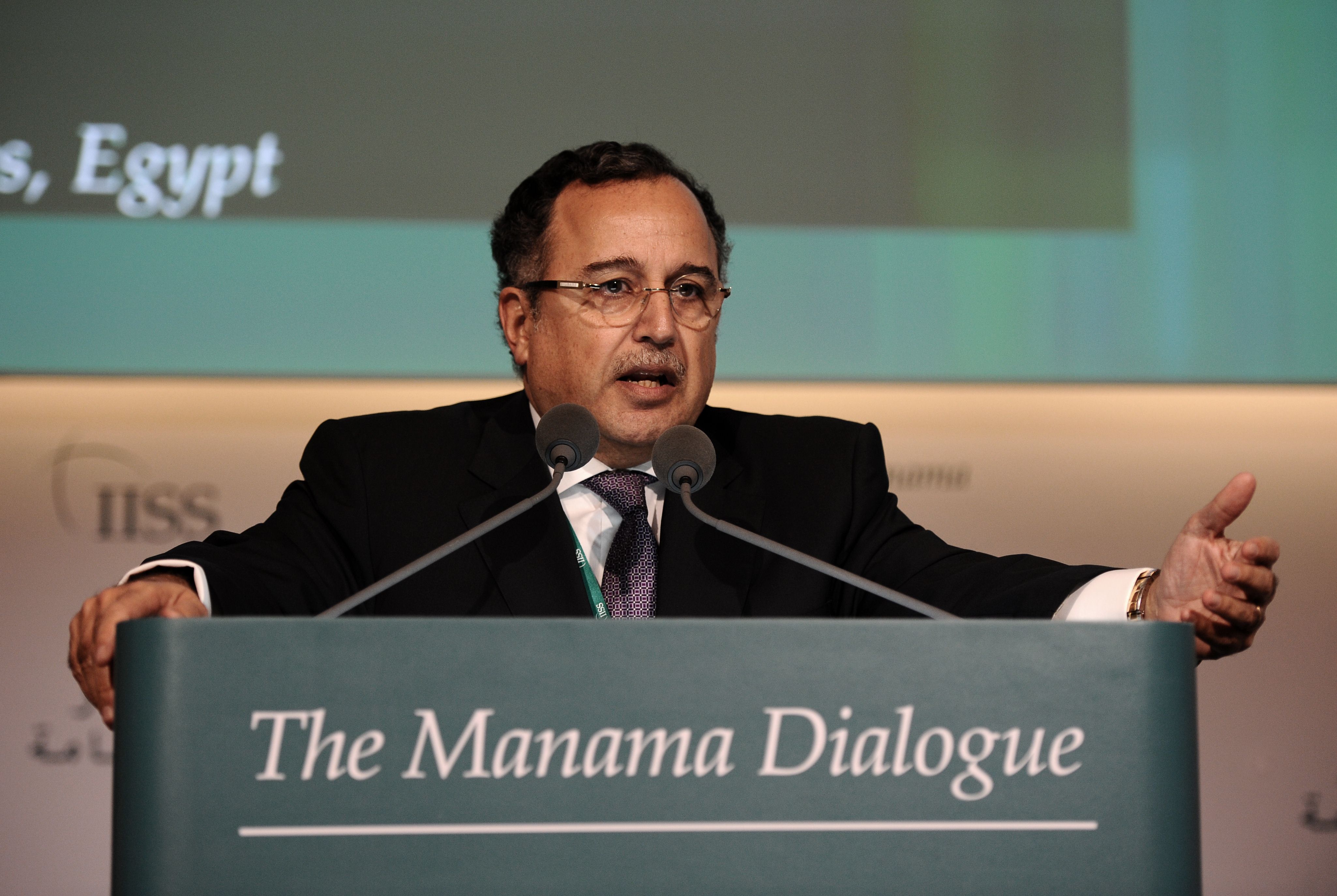 Minister of Foreign Affairs Nabil Fahmy questioned the future role of outside powers in the Middle East during his address at the Manama Dialogue in Bahrain on Saturday.

Fahmy’s address at the International Institute for Security Studies Regional Security Summit came within the second plenary session entitled “Evolving Regional Security Architecture, Conflicts and Outside Powers”. Speaking of the region as a whole Fahmy said that there has long been interest from “outside powers” in the region and that these powers will continue to have a role; however, this role should and must adapt to the changes in the region because “the old role does not fit.” He also stressed that all countries in the region, including Iran and Israel, must change their approach to the current security structures.

The minister said: “As conflicts become more regional, sub-regional… regional dialogues are imperative especially in situations where states recognise each other.” He added: “Arab countries… need to do more themselves about their defence systems.”

There has been much suggestion of late that Egypt itself has been seeking to move away from the influence of the United States following a decision from Washington to suspend a large portion of military aid. A high-level visit by Russia’s ministers of defence and foreign affairs and the potential for a new arms deal to fill the void left by the American withdrawal only gave further strength to this view.

Egypt’s Ministry of Foreign Affairs has denied both the existence of an arms deal with Russia and that Egypt is seeking to replace any country with another. Upon assuming his role as minister, Fahmy announced that Egypt’s relationships with all countries would be reassessed and has also stated that Egypt is looking to re-position itself as an Arab country with African roots.

Fahmy addressed the issue of proliferation of weapons of mass destruction during his speech in Manama. He said this “will occur if we don’t apply an equal standard to everyone; Arab countries, Iran and Israel.” He added that all nations must reach “parity” in order to avoid such proliferation.  He also mentioned the initiative to declare the Middle East a zone free of nuclear weapons, an issue Fahmy said Egypt has been demanding for more than 30 years.  He set out an action plan to achieve this at the United Nations in September and sent letters to the members of the UN Security Council to convene a regional conference on the issue, which was previously delayed due to what the ministry and Arab League believed to be a lack of cooperation from Israel.

US Secretary of Defence Chuck Hagel also addressed the Manama Dialogue on Saturday, discussing ‘The Global Security Priorities for the US.” Hagel made reference to the US-Egyptian relationship during his address stating that the two “have an important defence relationship”. He stressed that US wants Egypt’s transition to succeed and for them to share a “strong relationship”. He said that in his regular contact with Minister of Defence Abdel Fattah Al-Sisi, he has “stressed the importance of demonstrating the interim government’s commitment to a non-violent inclusive sustainable democratic transition.”

Hagel said that Egypt and the US will cooperate “on matters of common interest”. He added: “We will also engage partners in the region to support an Egypt that is secure and stable, more inclusive and more responsive to its people and a true partner for peace.

Fahmy was scheduled to meet with Hagel as part of a round of bilateral meetings on the side of the summit. Fahmy was also expected to meet with the King and Crown Prince of Bahrain, Norwegian Minister of Foreign Affairs, US senator Tim Kaine and British Foreign Secretary William Hague, who delivered the summit’s keynote address on Friday evening.