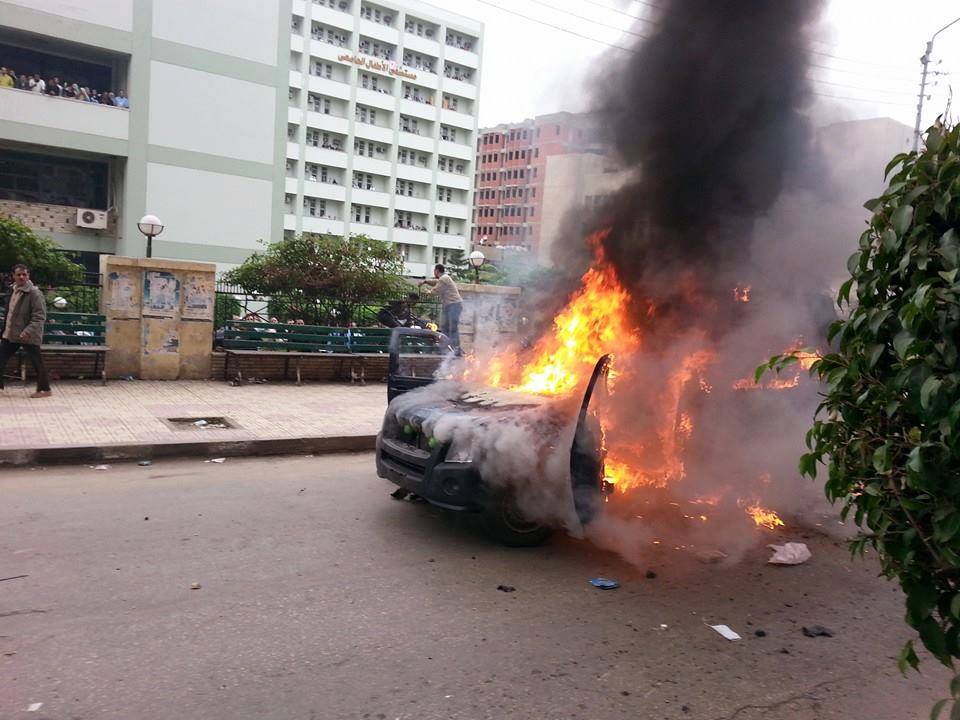 Students Against the Coup (SAC) clashed on Sunday with security forces on the campus of Mansoura University in Daqahleya.

Toqa Mohamed, a student at Mansoura University, said that over 100 students staged a protest and set fire to a police vehicle.

Mohamed Abdel Salam, researcher at the Association for Freedom of Thought and Expression’s (AFTE) Freedoms and Student Rights programme, said that security forces began attacking the protesting students with teargas as they approached the university gate.

“Two police vehicles and a number of security personnel tried to enter university campus,” Abdel Salam said. “They were chased by students who set fire to the two vehicles.”

Abdel Salam said the police then increased their use of force, using teargas and birdshot. Students responded by throwing rocks at the security services.

“The police have repeatedly been asked to exercise self restraint when dealing with student protesters,” Abdel Salam said. “Yet it seems they insist on scuffling with students.”

In early November, Prime Minister Hazem El-Beblawi announced that police forces would be present at university gates to help maintain security. El-Beblawi’s cabinet gave university presidents the right to request the entry of police forces into campus in case of “threats to individuals, entities or  students”.

Until 2009, the Ministry of Interior was responsible for providing Homeland Security  personnel to secure universities. In 2009, the Administrative Court overruled this decision, establishing an “administrative” university security.   This decision barring Homeland Security from University campuses did not go into effect until the 2011 revolution.