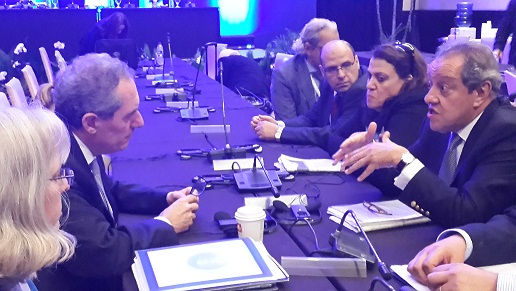 Abdel Nour was quoted in a ministry statement as saying that the package guarantees countries’ rights to subsidise basic food crops for the purposes of food security “without violating the provisions of the [WTO’s] agriculture agreement.”

The conference, which began on 3 December on the Indonesian island of Bali, concluded on Friday following thorough negotiations between representatives from 160 countries in a bid to reach agreements on issues such as food security and trade facilitation.

Azevedo called on the ministers to reach an agreement on trade issues in hope to “keep alive the stumbling 12-year-old drive to slash international trade barriers.”

During the negotiations, Abdel Nour called it “unfair” for developed countries to continue subsidising their farmers while depriving developing countries of “their right to a permanent solution to secure their food needs”.

African delegations also stressed the importance of reaching a “fair deal” in Bali that reflects the interests of the developing countries and takes into account the significant issues for them “especially the food security issue”.

On the sidelines of the conference, Abdel Nour met with the representative of the American delegation, Michael Froman, where the latter pointed out that many American companies wish to invest in Egypt, “but they are waiting for the situation to stabilise.”

Abdel Nour also met with Executive Director of the WTO, Arancha Gonzalez, and discussed the possibility of benefiting from the organisation’s technical assistance programmes through helping Egyptian companies to improve their exports.

According to the statement, Gonzalez said she had recently held several meetings with officials from Islamic Development Bank and the Canadian government, “and there was an agreement on the importance of benefiting Egypt from the assistance programmes.” She added that Egypt tops the WTO’s list of priorities.

The WTO’s ministerial conference has been held every two years since 1995 and gathers ministers from different member nations to discuss trade agreements.