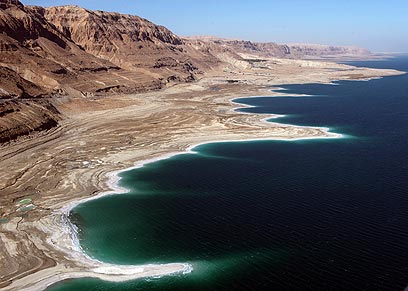 AFP – Representatives of Israel, Jordan and the Palestinians will on Monday sign a “historic” agreement to link the Red Sea with the shrinking Dead Sea, an Israeli minister said.

Energy and Regional Development Minister Silvan Shalom told army radio that under the agreement to be signed at the World Bank in Washington, water will be drawn from the Gulf of Aqaba at the northern end of the Red Sea.

Some will be desalinated and distributed to Israel, Jordan and the Palestinians, while the rest will be transferred in four pipes to the parched Dead Sea, which would otherwise dry out by 2050.

Shalom noted the economic aspects of supplying cheap desalinated water to neighbouring states, the environmental angle of “saving the Dead Sea” and the “strategic-diplomatic” aspect of the deal, being signed at a time when peace talks between Israel and the Palestinians are floundering.

“This is a breakthrough after many years of efforts,” he said. “It is nothing less than a historic move.”

According to Yediot, the Palestinian Authority’s minister in charge of water issues, Shaddad Attili, and Jordanian Water Minister Hazem Nasser will be signing the agreement with Shalom.

Shalom said that following the signing, “an international tender will be issued for the entire project — building the desalination plant in Aqaba and laying the first of the four pipes.”

According to Yediot Aharonot newspaper, which first broke the story, the idea dates back to the 1994 signing of a peace treaty between Israel and Jordan.

The World Bank in 2012 published a feasibility study report on the project.

But Friends of the Earth Middle East and other environmental groups warned that a large influx of Red Sea water could radically change the Dead Sea’s fragile ecosystem, forming gypsum crystals and introducing red algae blooms.