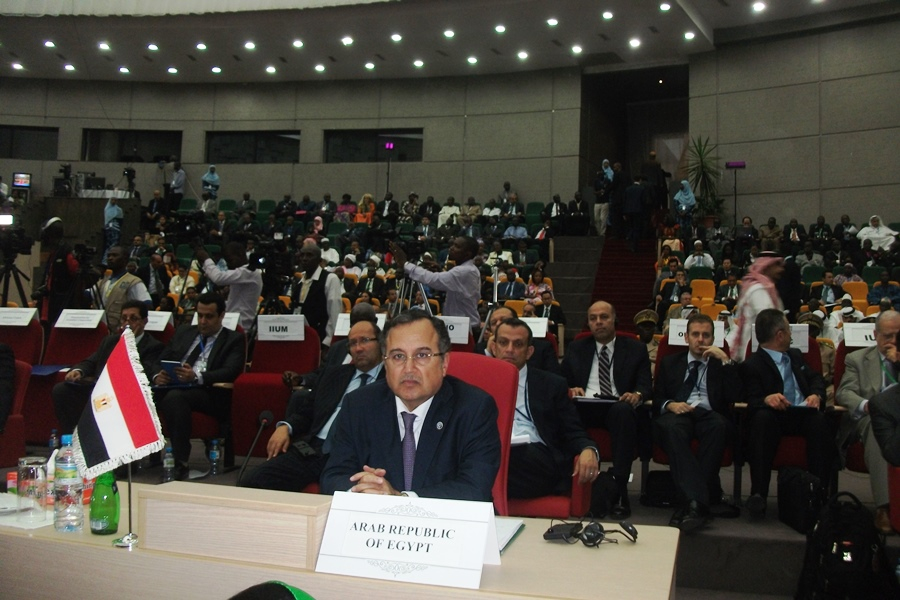 Minister of Foreign Affairs Nabil Fahmy outlined Egypt’s position on several regional and international issues relating to the Muslim World during his speech at the Organisation of Islamic Cooperation’s (OIC) 40th Council of Foreign Ministers.

Speaking on Monday in Conakry, Guinea, Fahmy told the representatives from the 57 OIC member states: “The events in Egypt over the last three years confirm that we in Egypt are on the path of building a modern civil state based on the foundations of democracy.”

He said Egypt, “as a leading state” would continue “to defend the interests of the Islamic World” and work towards “maintaining peaceful relations among nations, respect for human rights, tolerance away from intolerance and hate speech, respect for international law and the sovereignty of nations, the fight against terrorism and promoting cooperation”.

Fahmy addressed issues of regional importance such as Palestine, Syria and the desire to establish the Middle East a “WMD-free zone”.

Fahmy reiterated Egypt’s continued support for the “Palestinian position in negotiations with Israel”. He rejected the “forceful occupation practices, which violate international law, expanding settlements, continued attacks on Haram Al-Sharif, housing demolitions and assassinations and the continuation of the occupying authorities in the non-fulfilment of its responsibilities towards the population of the Gaza Strip.” Fahmy called for an OIC symposium to be held to discuss the “preservation of the identity of Jerusalem and its Arab population”.

The minister also stressed Egypt’s support for the Syrian people, saying that he welcomed the announcement of a date for the convening of the long awaited Geneva II conference. He pointed out that Egypt supports a political solution to the crisis to achieve “stability of Syrian and the region, and to stop the bloodshed”.

Fahmy said that Egypt’s initiative to rid the Middle East of WMDs is “consistent with the demands of the OIC member states”. The minister re-launched the initiative at the United Nations in September, the first step being to convene a regional conference on the issue that had been postponed towards the end of 2012 due to what the ministry and Arab League described as lack of cooperation from the Israeli side.

The issue of minority Muslim communities around the world was also a focal point of Fahmy’s address, making specific reference to the problems facing the Rohingya Muslims in Myanmar. Egypt participated in an OIC delegation that travelled to Myanmar in November and stressed the continued commitment to assist the Myanmar government in addressing the problems between the Buddhist and Muslim communities.

Fahmy called for the UN to consider organising an international conference on the issue of Islamophobia. He also reiterated the assistance offered by Egypt’s Al-Azhar “to clarify the true image of Islam and to correct misconceptions” adding that “Al-Azhar will continue opening its doors to Muslim children around the world”.

The Council of Foreign Ministers is scheduled to last until Wednesday. It provides an opportunity for Foreign Minister from around the world to meet and discuss bilateral relations. Fahmy has already met with his counterparts from Palestine and Lebanon on the side of the summit in Guinea.