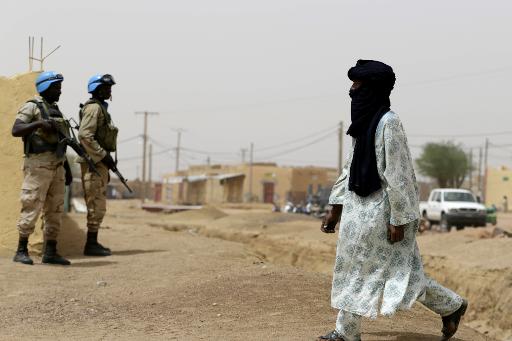 AFP – At least two UN troops were killed on Saturday in a suicide attack in Mali’s northeastern rebel bastion of Kidal, which came a day before the country holds a second round of legislative polls, a UN source said.

The soldiers – whose nationalities were not given – died when a suicide bomber ploughed his explosive-laden car into a bank that they were guarding.

“For the moment, we have at least two dead and several wounded among the MINUSMA African troops,” the source said on condition of anonymity, referring to the UN mission in the country.

“There are also a number of wounded among Malian soldiers,” the source added.

A local Kidal official said Senegalese soldiers were among those who guarded the BMS bank.

“Early this morning, a booby-trapped car was run into the BMS, killing the bomber,” said the official. He added that he saw “an individual on fire” but could not say if it was the bomber or a soldier.

A MINUSMA military official said: “The bomber came from the east of the city and went straight to the bank before blowing himself up.

“There was a huge bang that blew out the windows of some houses up to 500 metres [yards] from the bank.”

He called the attack “well-prepared.”

Mali is battling to restore stability after Al-Qaeda-linked radicals seized control of its northern half, submitting it to a brutal form of Islamic law for nine months before a French-led military operation launched in January ousted the extremists.

Saturday’s attack came a day before Mali was to hold a second round of legislative elections, the fourth time that the former French colony in west Africa has gone to the polls in less than six months.

The vote is the final stage in Mali’s return to democracy after a March 2012 coup that threw it into turmoil and opened a power vacuum that enabled the Islamists to seize the north.

Kidal, in Mali’s northeast, is a stronghold of the Tuareg separatist National Movement for the Liberation of Azawad (MNLA).

The main Malian city of the harsh Saharan region of the same name and the cradle of the nomadic Tuareg, Kidal has slipped from the regimented control of separatist rebels into a state of lawless anarchy, underscored by the recent murders of two French journalists by Islamists.

The French army is staging a large operation against Islamist fighters in the Timbuktu region, about 700 kilometres (440 miles) northeast of the capital Bamako.

A French military source in Bamako said Friday “military operations are ongoing” after French troops killed 19 militants in the area on Tuesday.

An African military source in Timbuktu called the operation “very large… the largest in the Timbuktu region since allied forces retook the main northern cities.”

The French were said to be targeting the area around Taoudeni, about 750 kilometres (450 miles) north of Timbuktu — the main city of the region of the same name.

The area “has become a refuge for terrorists and drug traffickers,” the source said.

A French military source in Bamako said Tuesday there was still a “pretty determined group” of fighters north of Timbuktu.