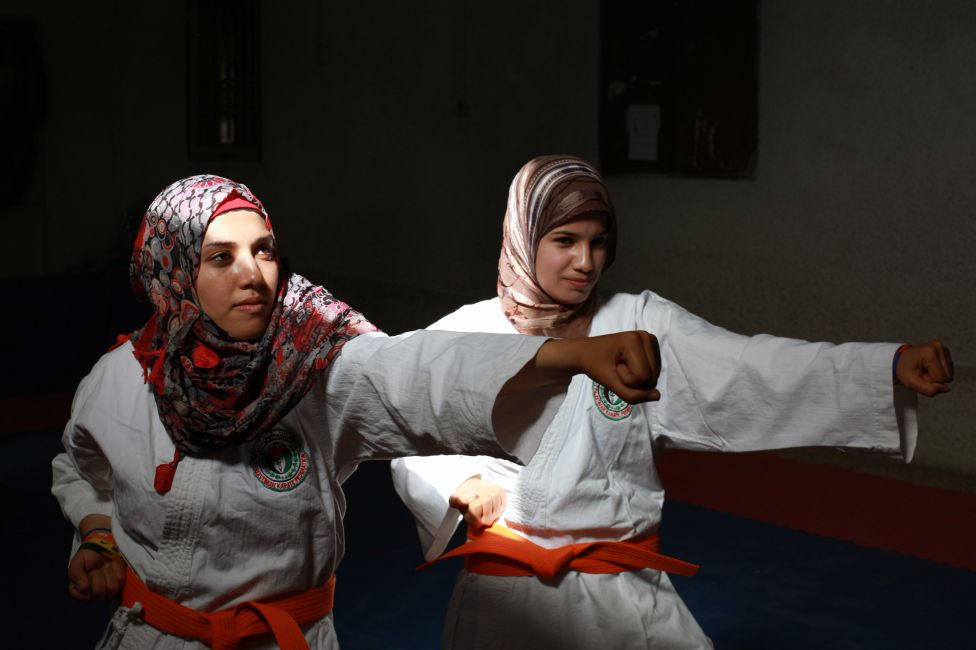 Women of different ages, sizes, social classes and backgrounds can be found at Gaza’s Karate Sports Club dressed in the classic white karate uniforms (known as Karategi in Japanese). They stand tall and barefoot. Some wear headscarves, some don’t. They all have different colored belts around the waists, marking their progress.

Emad Hammad, Gaza’s most famous and prominent karate instructor — or master, as many call him — studied the martial art while living in Egypt.

“I started teaching karate in Gaza 12 years ago. I was known by then, too, and people trusted me so they sent me their children to learn discipline, self-confidence and self-defense,” Hammad told The Media Line. “Teaching girls started a number of years ago but only spiked and bloomed recently, in the past couple of years or so. At first, it was hard to assemble a group of girls to form a class, so I trained them with the boys. Their parents trusted me enough to do that. Compared to now, I can easily form a class of 25 girls in a month or so. Times have changed.”

Now, Hammad teaches all kinds of classes, both mixed and separated by gender.

“I get regular visits by fathers who come and ask me about karate. ‘Is it violent? Doesn’t it affect femininity or bodily functions? Is it dangerous?’ And I understand,” he said with an exhausted smile. “We live in a conservative society but they end up trusting me enough to enroll their daughters, and some of them visit us regularly to watch their children in action.”

In Gaza, he holds high ranking positions in and out of the sports world, such as a sixth degree black belt, and has won numerous Arab and international awards. His achievements are too many to name.

“I have dedicated my life to karate,” Hammad added before introducing some of his female students. “It’s my undying passion and I have known nothing but this sport since I was under 18 years old.”

Many of his students seem to feel the same way.

“My life is dominated by school and Internet. I wanted to do something completely different, “ Diana Al-Kolek, 17, told The Media Line. “My friend told me about karate by chance, and I decided to give it a try. It’s the perfect thing, very beneficial, and it’s not a distraction. It helps me stay in shape because I hate working out. It keeps my mind fresh and active, and teaches me self-defense so I can kick butt. I couldn’t ask for more.”

Nour Saleh, a young girl wearing a blue belt with pride, delved into the world of karate only two years ago. She sailed through the tests for white, yellow and orange belts perfectly, and now only brown and black are left. But Nour won’t have the chance to work her way up to the black belt. She will get married soon and this will mean the end of her karate journey.

“I wanted to try karate for so long. I kept hearing ‘No’ very loudly from my family telling me I am crazy. They listened to all the stereotyping of this sport: it’s violent and anti-feminine and all that. Also, the society didn’t swallow the image of females playing karate really well,” Saleh told The Media Line. “It all changed when I invited a friend who practiced karate for a while. She answered all their questions and eliminated all their fears, so they caved in and usually I even have my mother or father watching and cheering me on.”

Her mother said that her feelings about the sport had changed.

“I always supported my children fully — I stood behind them 100 percent. But I love her and I was afraid she would end up hurt or bruised,” Um-Mohammed, Nour Salah’s mother, said. “After meeting her friend and her trainer, I had to give in. I felt at ease with it. But she will get married soon and she will have to stop to take care of her family and live the new life of marriage.”

A.N., a 16-year-old wearing a headscarf, who asked not to give her full name, paced back and forth while talking to her father. She asked his permission to speak to a journalist.

“I am a very girly girl,” she told The Media Line.  “I come from a conservative family and I am my father’s only child after they tried to have children for 14 years.  I never considered karate. You can even say I was forced to try it at first.”

A.N.’s neighbour was found dead a few months back. She was killed and dumped somewhere far from her home. Police suspected rape and murder, and A.N.’s family was devastated.

“My dad couldn’t sleep for days. I wasn’t worried but seeing him worried frightened me. Also, news surfaced about sexual harassment, especially in taxis, and that was my dad’s cue to tell me that I will be soon taken to try karate out. I was dumbfounded and confused, but a few weeks in I started loving it. I gained self-confidence and self-defense tools and I made friends who I consider sisters,” she said breaking into a smile.

Her father listened and nodded through the whole story, finally adding, “A father must do anything to protect his children. A girl’s reputation matters here. Contrary to what people think here, karate empowers women. It doesn’t jeopardise their reputation.”

Reem Abu Nada, stands tall and confident, ready to strike back and defend herself.  She started practicing karate before she got married, and continued mastering the sport even after marriage.

“My husband knows about it and supports me. He told me he has no problem in my continuing my passion and becoming better at karate. He even pushes me to work harder on myself,” Abu Nada told The Media Line. “This was shocking to my friends and fellow karate sisters here, but it gave them hope, too. We all aspire to win local and international awards and we all hope to become the first female trainers of karate.”

Hammad said the karate schedule is flexible. Many sessions are held each week, which makes it accessible to children who go to school or for women have families and careers. Its affordability makes it even more popular.

“It’s refreshing to see women continuing and coming back to karate every month and every year, even after marriage.”

I know girls aspire to become trainers and to compete, despite the difficulty of travelling alone abroad for competitions. They are very passionate and ambitious,” he said. “We become a family. I am proud to have formed a big female karate team that always wins every local competition. Karate might be perceived as violent, but in reality it’s a sport that promotes peace and creates strong bonds between people. It’s all built on trust and dedication.”

This article appeared on The Media Line News Agency (TML).